In Greeting the Year of the Tiger 壬寅虎年 published on Lunar New Year’s Eve, 31 January 2022, we noted that:

The writer Lu Xun used the expression 拉大旗作虎皮 lā dàqí zuò hǔpí, literally ‘drape yourself in the flag as though it were a tiger skin’, to mock people who put on a formidable show to disguise their lack of substance. Today, the expression is generally used to describe self-important bullies, scam artists and those who promote their personal interests in the guise of advancing some great cause..

We foresaw that the 2022 Year of the Tiger (1 February 2022—21 January 2023) would be a time of exaggerated claims, intimidation and hubristic overreach. For the people of the People’s Republic of China, the  Year of the Tiger proved to be nothing short of calamitous.

At the beginning of the Year of the Tiger we published the first section in Xi Jinping’s Empire of Tedium, titled A Winking Owl, a Volant Dragon & the Tiger’s Arse. There we recalled that Mao Zedong famously said that those in power believe that ‘their tiger’s arses can’t be touched’ 老虎屁股摸不得.

In January 1962, during a rambling speech at an unprecedented gathering of Party leaders known as the Seven Thousand Cadres Conference which had been convened to dissect the disastrous policies of the Great Leap Forward years, Mao made a half-hearted self-criticism before turning things on their head in his trademark ‘bait-and-switch’ style. ‘Those who refuse to accept responsibility, are scared of being held accountable’ he declared, completely ignoring the analysis of his comrades that the Great Leap disaster that had killed tens of millions of people was ‘thirty percent natural disaster and seventy percent man-made devastation’ 三分天災七分人禍. Mao continued:

— Mao Zedong, ‘Talk At An Enlarged Working Conference Convened By The Central Committee Of The Communist Party Of China’, 30 January 1962 (published for the first time in 1978)

As it turned out, the only tiger’s arse that really could not be poked was that of Mao himself.

Over sixty years later, as China was dealing with the consequences of the three-year-long calamity of Covid — ‘a natural disaster exacerbated by man-made catastrophe’ 天災人禍 tiān zāi rén huò that was reminiscent of the Great Leap Forward — the arse of the country’s ruling tiger, Xi Jinping, remained untouchable, if not above reproach.

Below, we start our farewell to the Year of the Tiger with a bitter yet lighthearted pictorial introduction by Huang Yongyu, a friend for over forty years whose art and writing has featured in our work since 1986. This is followed by Liu Chan’s video retrospective of the year 2022 in twenty-two images and a selection of the calligraphic couplets and commentaries that he compiled during the year.

Liu Chan joins an amorphous China-wide group of writers, artists, creators and concerned citizens, including Fang Fang, Jiang Xue and many citizen reporters and unofficial chroniclers, in providing independent accounts of contemporary China. These run in parallel, and often fly in the face of, the punctiliously curated China Story of Official China. These disparate efforts are part of the struggle of memory against forgetting. For this reason, this appendix in Xi Jinping’s Empire of Tedium is also included as an entry in The Other China.

The Chinese rubric of this appendix — 虎頭蛇尾 hǔ tóu shé wěi, literally ‘tiger head snake tail’ — is a reference to blustering deception or the disparity between what is said and what is done. It also points to the fierce progress of the Year of the Tiger and the absurdly cruel twists and turns of its denouement.

I made a calligraphic record of twenty-two events during 2022. I wonder how many of them you can remember? For reasons that you may well be able to appreciate, I was only able to write up those twenty-two incidents. In reality, it was a tragic year about which much more could be written.

The Little People worse off than Curs

The Covid regime is as vicious as the proverbial tiger and under it everyday people suffer more than dogs.

‘Dynamic zero-Covid’ policies are pursued at the expense of the livelihood of countless normal people. Everyone is heavily burdened with having to make rent or mortgage payments, as well as the relentless pressure of living expenses. Small and medium privately run businesses are particularly hard done by, and the worse off is the restaurant business. I got a call from a friend in the food industry today and they frankly despaired that the situation was so untenable that they were even thinking of ending it all. It made me feel terrible, so I have made a record of it here.

It was devastating to learn that Qian Wenxiong, one of the directors of the Hongkou District Health Commission in Shanghai has committed suicide. Crazy lock-down rules and regulations have been driving local officials and the populace to the edge. The price of groceries is also through the roof. There was Feng County in February, then new Covid restrictions from March, with all kind of lock-down measures being imposed. There have even been incidents in which truck drivers have been locked in their vehicles for days on end. Who knows how many people have been driven mad or to their deaths as a result? This is not the way that imperial-style governance can achieve lasting results. I strung together the six characters — ‘Rules, Exorbitant, Submission, Feng County, Lock Downs, Madness’ — to record this moment. They are my way of commemorating those who have died unnatural deaths due to the Covid policies. May they rest in peace. 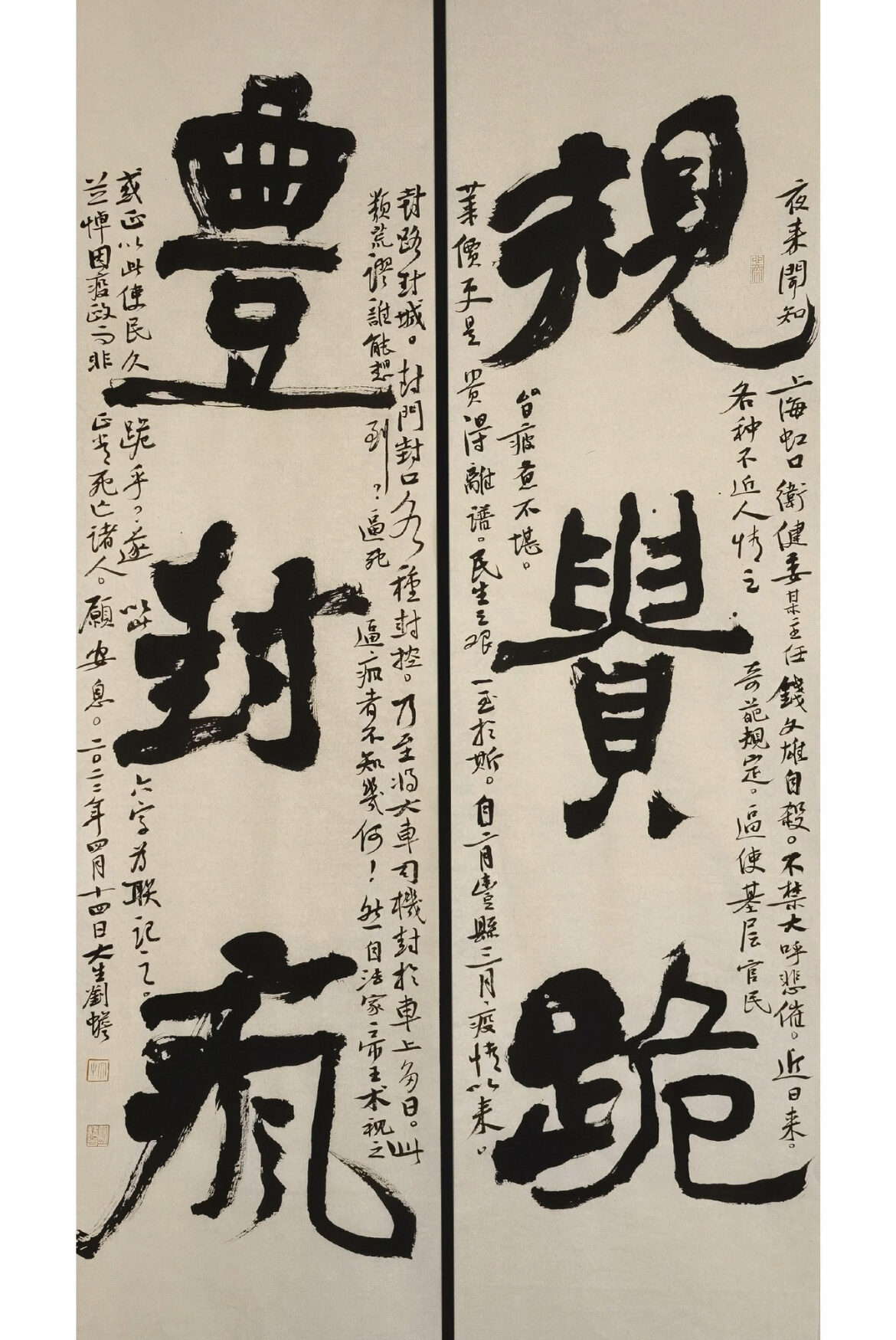 Where Are All the Writers?

Since 2003, we have seen Chai Jing’s SARS Diary, Fangfang’s Wuhan Diary and, most recently, the Xi’an Diary of Jiang Xue, which she composed during the Xi’an lockdown.

There are well over 100,000 members of the All-China Writers’ Federation and similar bodies. Apart from trumpeting the virtues of the party-state, however, they have all remained completely silent. Their salaries come from taxes paid by ordinary people. Are any of them worth it?

100,000 Writers Mouths Firmly Shut, Not a Single One with any Guts. 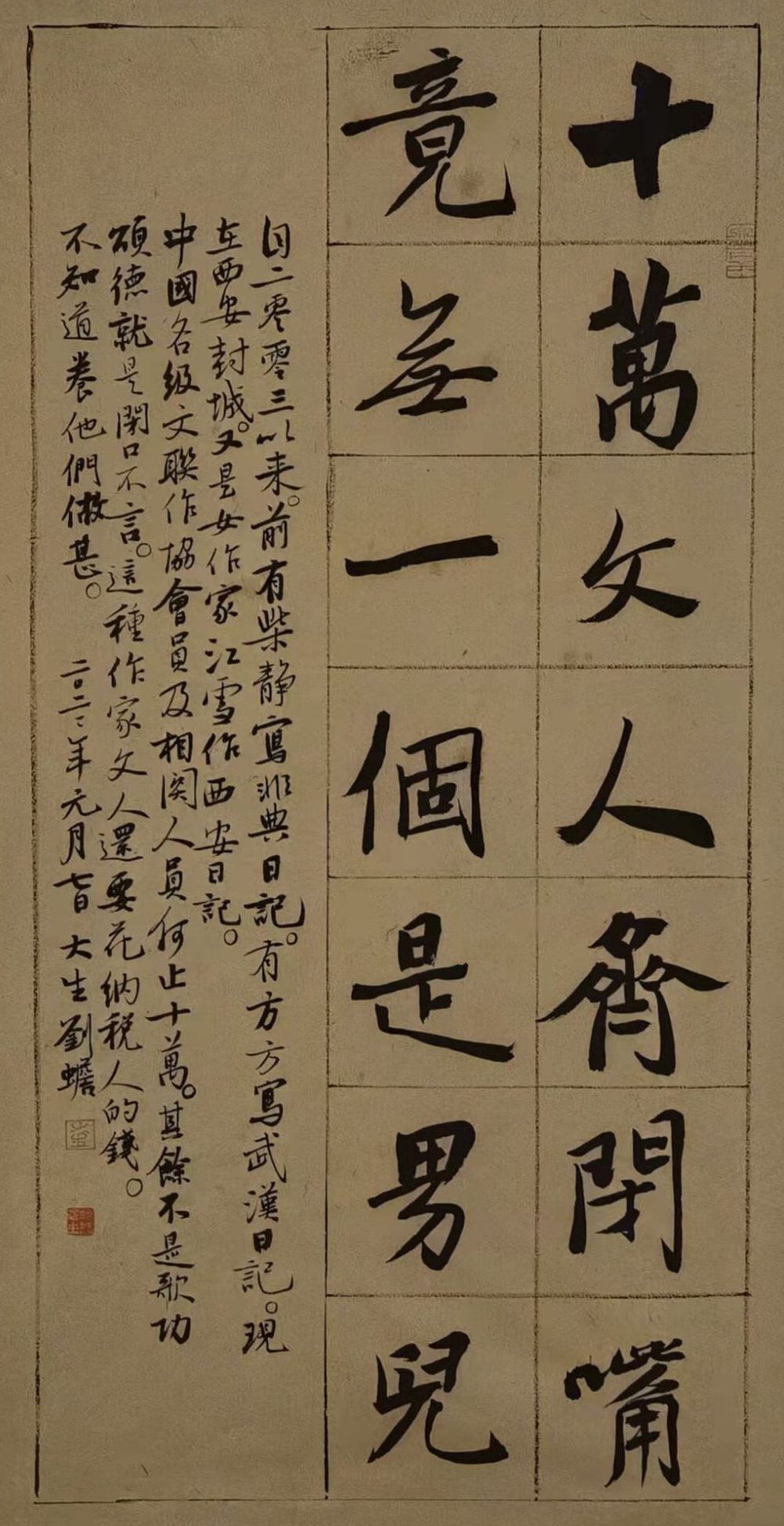 1. 竟無一個是男兒, translated here as ‘Not a Single One with Any Guts’, literally means ‘it’s surprising that there is no real man among their number’. As we noted in The Real Man of the Year of the Dog:

… During his first Tour of the South in December 2012, the just-appointed Secretary General of the Chinese Communist Party [that is, Xi Jinping] is said to have referred to the reasons behind the collapse of the Soviet Union. In doing so he supposedly quoted a famous line of poetry from the dynastic past: ‘No real man among their number’ 更無一個是男兒. It comes from a verse attributed to Madam Flower Bud 花蕊, a concubine of Meng Chang 後主孟昶, ruler of the kingdom of Later Shu 後蜀. The poem reads in full:

Flags of surrender on the ramparts
Deep in the palace how can I know:
140,000 lay down their arms,
No real man among their number.

In effect, Xi was saying that now China had just such a ‘real man’ 男兒: himself. It did not bode well for the country. Official China may have stifled the country’s #MeToo moment, but with the announcement in late February 2018 that the Constitution would be revised to allow the state leader to serve more than the previously allotted two terms, China’s Chairman of Everything was in fact claiming there is #OnlyMe.

Then there was that report about how people in Shanghai were unable to borrow a defibrillator from an ambulance outside their locked-down apartment building to help a family member who was suffering from an asthma attack. They couldn’t get help in time and the person died. It really makes you wonder why the authorities deal with everything in such a rigid and unfeeling manner? …

… Sure, this is supposed to be like the fabled Prosperous Ages of tradition, prosperous for the few perhaps, but a disaster  for the Garlic Chives and the Ants.

According to the sūtra, the eight-arms of this Bodhisattva wield different sacred instruments, each of which plays a role in the salvation of the suffering masses:

A mobile phone for ease of communication; a needle for administering vaccinations; a cotton swab to test for the virus; a bullhorn to call people out to take tests; a health app to determine one’s status; and, an infrared thermometer to take people’s temperatures.

If you get through this gauntlet you may be issued with a pass that allows you to go out.

The eight sacred devices of the Covid Bodhisattva protect the nation and salvage the people, spreading merit to all.