Dasheng’s Little Lectures 大生小議 is a series of short videos by Liu Chan 劉蟾, aka Dasheng 大生, an artist and independent scholar based in Beijing.

In his ‘Shorts’ Dasheng comments on language, life and thinking in China today. They are reproduced here both as part of The Other China section of this site and in Lessons in New Sinology.

In this installment in Dasheng’s Little Lecture series Liu Chan responds to a controversy surrounding ‘representation’ — what Chinese faces should be promoted in advertisements and what kind of Chinese face intrinsically stigmatises or ‘defaces’ the Chinese people 醜化中國人 chǒu huà Zhōngguó rén? Wherever you look there are examples of ‘Chinsulting’ 辱華 rǔ huá.

‘Chinese people should all have a flawless appearance that reflects the [ideal revolutionary standard of being] ‘Impressive, Outstanding and Consummate’. All women should have heart-shaped faces with almond eyes and all men should have a well-built and sporty appearance with bushy eyebrows and large round eyes. Anyone who falls short of these standards should be deprived of Chinese citizenship.’

After acknowledging his own physical defects, Dasheng notes that according to modern aesthetic standards celebrated figures such as Guan Gong 關公 [the God of War] and the heroic Zhang Fei 張飛 of the Three Kingdoms, not to mention the dark-skinned and squinty eyed Song-dynasty jurist Bao Zheng 包拯 [Judge Dee] all fail to measure up. But, Dasheng tells us, there’s no need to worry: an acceptable face of China can simply be imposed by means of a nationwide state-funded plastic surgery campaign. The people’s re-sculpted features might be generic and monotonous, but giving the Chinese face in this way will put an end to stigmas.

A historical note appended to Dasheng’s Little Lecture talks about the first formal Western-style portrait of a Chinese ruler — the Empress Dowager Cixi of the Qing dynasty. Since the founding of the People’s Republic of China, ‘official portraits of leaders’ 標準像 biāozhǔn xiàng, present the Communist Party’s formal face to the world. Touched-up photographs of faces with flawless skin, roseate complexions and lacquered black hair are part of a modern tradition that melds dynastic practice and the votary images of ancestor worship with Soviet-style portraiture.

We are grateful to Callum Smith for his technical assistance. 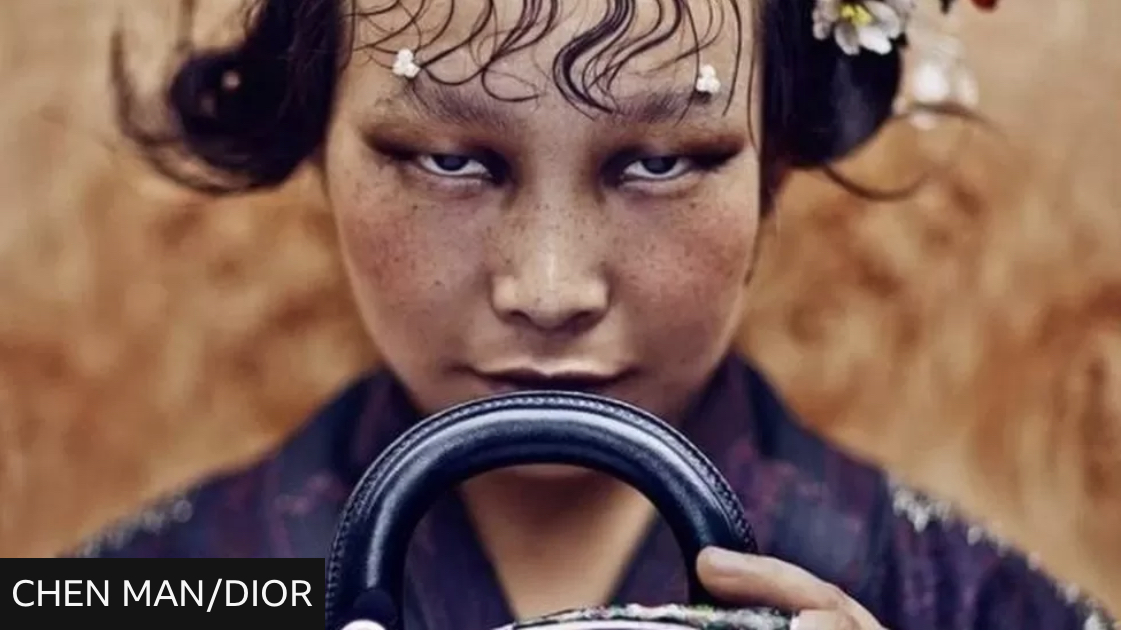 A Chinese fashion photographer has apologised for her “ignorance” after a picture she shot for French luxury brand Dior sparked outrage.

“I blame myself for my immaturity and ignorance [in my past works],” Ms Chen [陳漫], 41, wrote on social platform Weibo.

Dior said the photo, which was recently displayed at a Shanghai exhibition, has since been removed.

“Dior, as always, respects the sentiments of the Chinese people… If any errors happen, [Dior] must be open to receiving feedback and correct them in time,” the fashion house wrote on its Weibo account on Wednesday evening, adding that the work was an artwork and not a commercial advertisement.

The photo first went on display on 12 November, but immediately sparked a backlash from some netizens — habitual users of the internet — and then local media outlets.

In contrast, an editorial by the Beijing Daily described the model in the Dior photo as having a “gloomy face” and “sinister eyes”.

“For years, Asian women have always appeared with small eyes and freckles from the Western perspective,” said the editorial. “The photographer is playing up to the brands, or the aesthetic tastes of the western world.”

Chinese social media users echoed this, Ms Chen’s photos were an “insulting” portrayal of what those in the West believed Chinese women looked like.

“This is how Western people think we look,” said one user on Weibo, adding that Chen Man had played up to this. Many added that they would boycott the luxury brand.

Meanwhile, a commentary by China Women’s News said that the image of the model with “swollen single eyelids” made people feel “uncomfortable”.

Some Chinese Internet users pointed out that the photo was reminiscent of Ms Chen’s photo series dated 2012, which she had shot for i-D Magazine.

But not all agreed. Some stood up for Ms Chen, with one Weibo user saying: “Why can’t a Chinese woman with small eyes also be considered beautiful? I don’t see any problem with this.”

In her statement on Wednesday, Ms Chen said that she had “reflected deeply” and felt compelled to issue an apology after examining “nearly every negative comment” about her artwork.

“I was born and raised in China. I deeply love my country. As an artist, I’m totally aware of my responsibility to document Chinese culture and showcase Chinese beauty through my work,” she said.

“I will educate myself on Chinese history, attend more relevant events, and improve my ideologies… I will strive to tell China’s story right through my work.”

Ms Chen is a well-known photographer in the Chinese fashion world. She has shot covers for top magazine titles and has photographed celebrities David Beckham and Fan Bingbing.

A 2019 advertisement of Chinese food brand Three Squirrels [三只松鼠] reminded some Chinese people of how Westerners often use slanted eyes to mock them because the model in the ad has small eyes and is dressed up with strong taste [sic]. For this reason, it was labeled as an attempt to “humiliate China.” Three Squirrels withdrew the advertisement a few days ago, but it is far from settling the matter. The model defended herself in a post Sunday evening, asking “am I unqualified to be a Chinese because of my small eyes?” She also complained that it is a morbid statement to make a big deal of everything. This has further fueled the controversy.

The model, who was in the ad that ignited public fury over Western stereotypes “insulting China,” wrote on social media that “does that mean I should not be a Chinese because I was born with small eyes [眯眯眼]?” Her response sparked a fresh wave of debate.  …

“I was born with eyes like that. They are even smaller in real life. Does that mean I should not be a model because I was born with small eyes?” the model involved posted on her Weibo account under the name Cainiangniang [菜孃孃]. “I am all for patriotism… but this is kind of morbid,” she added, calling on netizens to be reasonable. 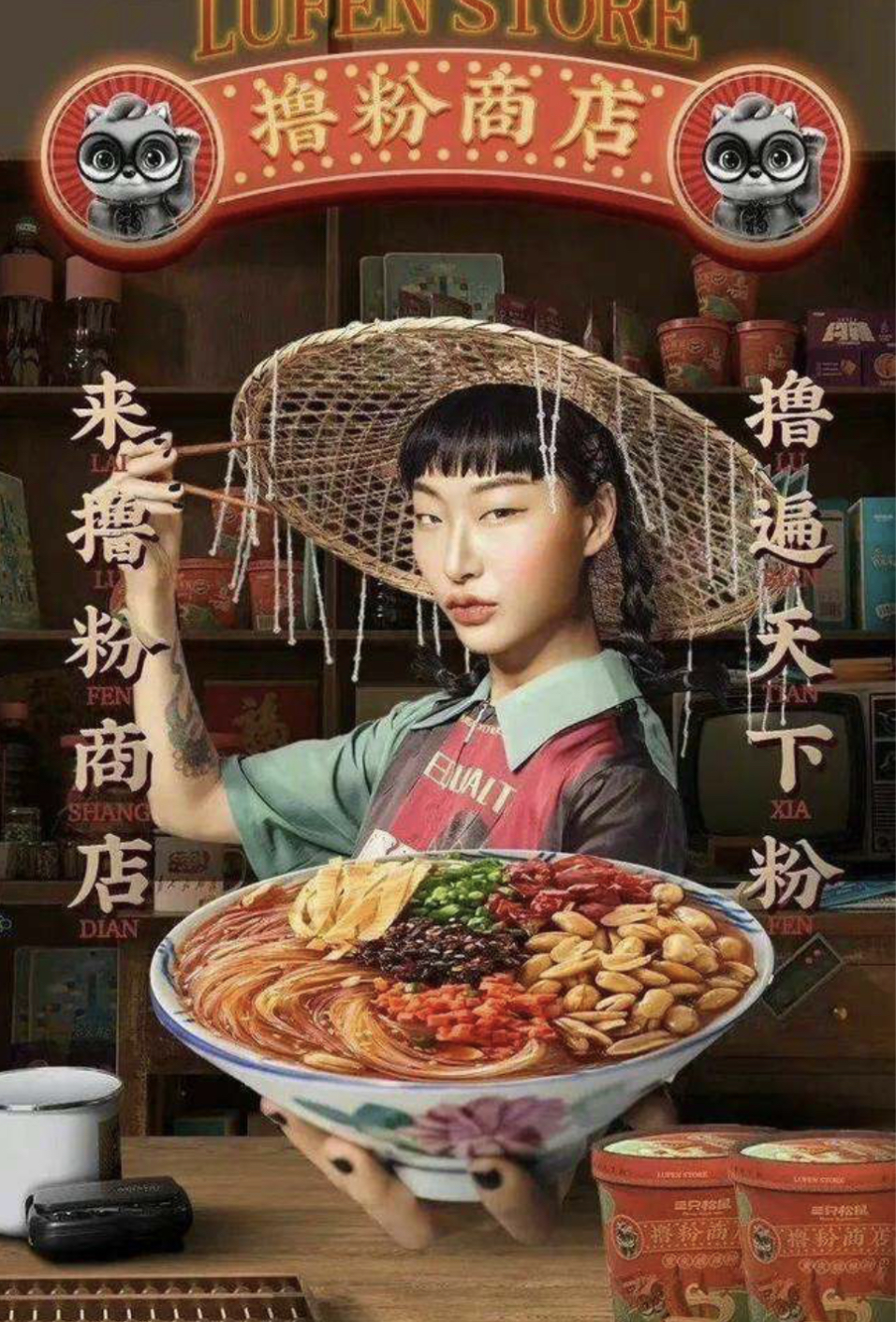 Even if your Eyes are Naturally Small

By having small or squinty eyes you are ‘defacing the Chinese’. Online friends claim that [because of its advertisements] the Three Squirrels food company has vilified the Chinese people. But let’s face it, it’s just too easy to ‘stigmatise’ the Chinese.

It was Forbidden to Throw Shade

In 1903, American portrait artist Katharine A. Carl got the commission of a lifetime. Sarah Pike Conger, wife of the then-U.S. Ambassador to China, asked the artist to travel to Beijing to paint a portrait of Empress Dowager Cixi for exhibition at the 1904 World’s Fair in St. Louis.

In a bid to strengthen East-West diplomacy, the portrait would be China’s opportunity to show the face of a senior figure at the Imperial court to the world—a surprising turn because royalty in China did not previously allow their images to be publicly disseminated.

Carl accepted the offer and lived in Beijing’s Forbidden City for nine months. While she painted, she was required to follow centuries-old conventions: The portrait of the Empress Dowager could not show any shadows or perspective. Despite the restrictions, which Carl felt dulled her subject’s personality, she finished several portraits, one of which was ultimately shown in St. Louis.

As the only Western foreigner to live within the Forbidden City at the time, Carl made the most of her access and later published a memoir, With the Empress Dowager. Her account provides a rare glimpse into the final years of the Chinese Imperial Court.

Following the 1904 World’s Fair, China’s Minister to the United States, Liang Pixu [梁丕旭, aka Liang Pi Yuk], presented the portrait to President Theodore Roosevelt, who in turn transferred it to the Smithsonian.

— Portrait of an Empress, The Smithsonian Institution, 19 April 2019