One of the most common aphorisms in the Chinese lexicon of national identity and patriotism reads:

‘Everyone is duty bound to take responsibility for the wellbeing of society.’

The expression was coined by Gu Yanwu (顧炎武, 1613-1682), a famous independent scholar who refused to serve the rulers of the Manchu-Qing dynasty who invaded Ming China in 1644.

In modern Chinese, the term for 責 zé — ‘responsibility’ or ‘duty’ — is 職責 zhízé. The axiom 天下興亡匹夫有責 can also be translated as ‘Everyone shares a responsibility for the fate of the world.’

職責 zhízé, ‘responsibility’ or ‘duty’ is the theme of a short video released online on 1 December 2022. Produced by New Tang TV , a media group affiliated with Falungong, the video features an anonymous prose-poem the theme of which is 我的職責, ‘my duty’.

‘My duty’ refers to a well-known moment when, in 1989, a student who was rushing to join the protests at Tiananmen Square said in response to a journalist who asked why he was taking part in the demonstrations. He simply replied ‘It’s my duty.’

After Peng Zaizhou 彭載舟 carried out a daring one-man protest at Sitong Overpass in Beijing on 13 October demanding the resignation of Xi Jinping, an end to the government’s harsh Zero-Covid policies, as well as freedom and democracy, disparate groups of Chinese students overseas mounted their own protest movements, one of which called itself ‘My Duty Democracy Wall London’ (see 伦敦myduty民主墙). One of the organisers of the group told Li Yuan of The New York Times that:

Kathy: … being able to find each other online through our group ‘My Duty’ has been a real validation. We need to be able to hear each other’s voices. That’s because many of us — whether we have spent most of our lives in China or came overseas when we were relatively young — know that by and large the loudest and most insistent voices come from the hurtful majority. That’s why it’s so hard for our voices to be heard. We lack the courage to speak out and we don’t know when and where it is safe to do so. To have found a space where we can express ourselves freely is an incredible relief.

Li Yuan: I’ve read the group’s posts on Telegram and saw how, in the space of a few hours from the afternoon into the evening, some 200 people joined up. When you speak about ‘my duty’, what do you mean exactly?

Kathy: You’ve really got me, because honestly I can’t only say what it means for me. The expression ‘my duty’ occurred to me quite naturally as it comes from that line ‘It’s my duty’ (which was a line spoken by a young student protester in 1989 responding to a question about why he is going to Tiananmen Square featured in a clip in a 2019 BBC documentary. He replied: ‘It’s my duty.’). The biggest challenge we face now is where do we go from here?

As to what we mean by ‘my duty’ — although our voices are faint and the path ahead stretches out before us, we don’t expect anything from others or blame them for their inaction. We, at least, are in this together and we’re trying to build some kind of consensus.

Peng Zaizhou’s rebellious act was one of the inspirations of the White Paper Rebellion that swept China in late November 2022. Peng, along with a pantheon of men and women of conscience repressed by Beijing, also features in the following video.

Bei Ming 北明 of Radio Free Asia sent me the video on 1 December 2022. It features a prose-poem composed and recited by a Chinese student at a vigil held at Columbia University in New York on 29 November 2022.

The video was released just as Beijing entered a period of formal mourning for Jiang Zemin 江澤民, the party general secretary who led the party-state from 1989 to 2003 (and the PLA from 1989 to 2005). Jiang had come to national fame in late 1986 when, as party secretary of Shanghai, he successfully quelled a mass student protest calling for media freedom and democracy. His hard-line actions then, and the way he dealt with the Protest Movement in Shanghai during April-June 1989, were crucial to his promotion. It was announced that Jiang had died on 30 November 2022, just as Beijing was quelling another rebellion, this time a nationwide explosion of frustration, fury and contempt both for government policy and the draconian rule of Xi Jinping’s Communist Party. Thus, Jiang’s political life was bookended by two protests, and two periods of repression.

As I transcribed the text of the prose-poem of ‘It’s My Duty’, I couldn’t help remembering the events of late 1986. I had just published Seeds of Fire: Chinese Voices of Conscience with John Minford in Hong Kong. Dedicated to the 1979 pro-democracy protests of Wei Jingsheng, Seeds offered an account of the rebellious spirit of Chinese young people, students, thinkers, activists and cultural figures. Although we did not predict an uprising, we made the point that in the politically repressive environment of post-Mao China the makings of rebellion (the ‘seeds of fire’ 火種 huǒ zhǒng) were ever-present (the title of our book was inspired by a line from Lu Xun: ‘As long as there shall be stones, the seeds of fire will not die’ 石在，火種是不會絕的。). I had also just returned to Canberra from Beijing, where I had met and interviewed a rebellious literary scholar who was around my age. His name was Liu Xiaobo (see 中國人的解放在自我覺醒, 《九十年代月刊》，1987年3月).

As the students demonstrated in Shanghai in December 1986 I spent time transcribing a cassette of songs by a young Beijing musician called Cui Jian 崔健. I had been given the tape by Danny Yung 榮念曾, a friend and director of 進念 Zuni Icosahedron, an experimental theatre group in Hong Kong. Danny had encountered Cui Jian during a trip to Beijing and the rocker had given him a selection of his songs. The recording was crude, the tape of inferior quality and the songs were barely audible. It took long hours of painstaking listening and scribbling to note down the lyrics of the songs. Listening to that crunchy recording, both Danny Yung and I instantly knew that Cui Jian’s early work was destined for the status of a classic.

Later, John Minford and I included two of Cui’s songs — ‘Nothing to My Name’ and ‘It’s Not That I Can’t See’ — translated by me and Linda Jaivin in the second edition of Seeds of Fire, which was published in New York in 1988.

As I transcribed ‘It’s My Duty’ thirty-six years later, I felt like I was giving Jiang Zemin a middle-finger as he set off ‘to meet Marx’. It is a happy coincidence that ‘It’s My Duty’ was produced by New Tang TV, since Jiang Zemin is notorious for the violent and ongoing repression of Falungong.

This appendix to Xi Jinping’s Empire of Tedium is dedicated to the memory of Chi Hsin 齊辛 (齊心), the husband-and-wife writing team of Lee Yee and Liang Liyi.

On 5 October 2022, the day that Lee Yee passed away, we commemorated him by reproducing Baraye, a song by Shervin Hajipour (شروین حاجی‌پور, 1997) that had become the anthem of the 2022 Mahsa Amini protests in Iran (see ‘For’ برای — in Memory of Lee Yee, China Heritage, 5 October 2022).

We are the orphans of Tiananmen Square. We are the sprouts of hope that spring up after your prairie fire. We too have sunk to the bottom of the Yangtze River, just as we were buried under the wreckage of that high-speed train. We are the people accused of ‘ulterior motives’ involved in the bus crash in Guizhou and we are those who upset your stability maintenance by being incinerated in those apartments in Urumqi.

We are the ‘low-value people’ who wander throughout your Prosperous Age. We are the external forces crying out in solidarity with those inside your iron room.

We are the people of Hong Kong whose homeland has been stolen.

We are the Uyghurs who have been deprived of freedom.

We are our own salvation, even locked up in your temporary hospitals. We are that yearning for freedom despite the chains. We are the voices that you would delete. We are the people of conscience that you throw out of their teaching jobs.

We are the last generation to tolerate this. We are the future of those who you would keep restrained.

We stood before your tanks.
We stand atop Sitong Overpass.

Today, we still stand and we are standing here.
Tomorrow, we will also be here to confront you.

Because it is my duty. 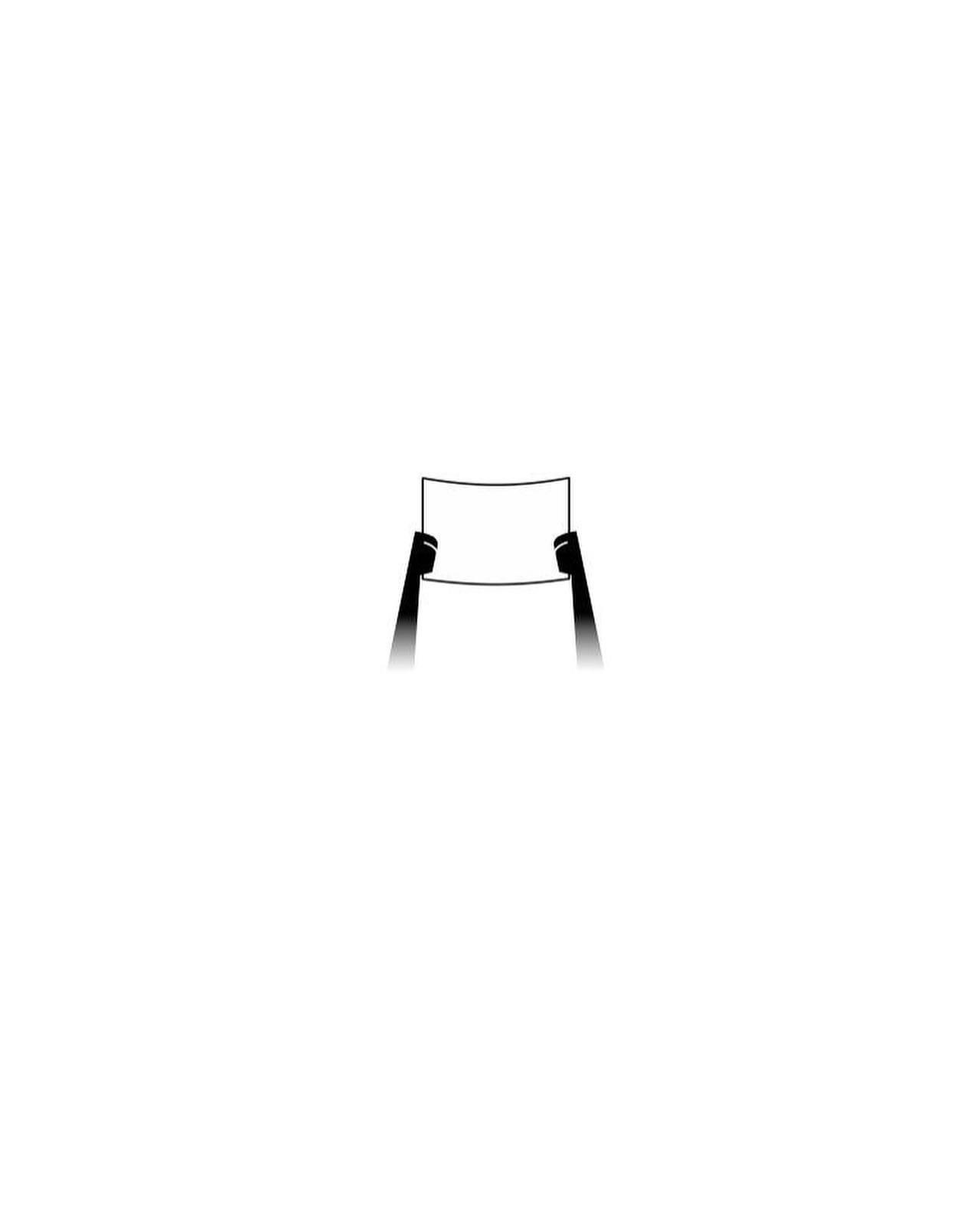 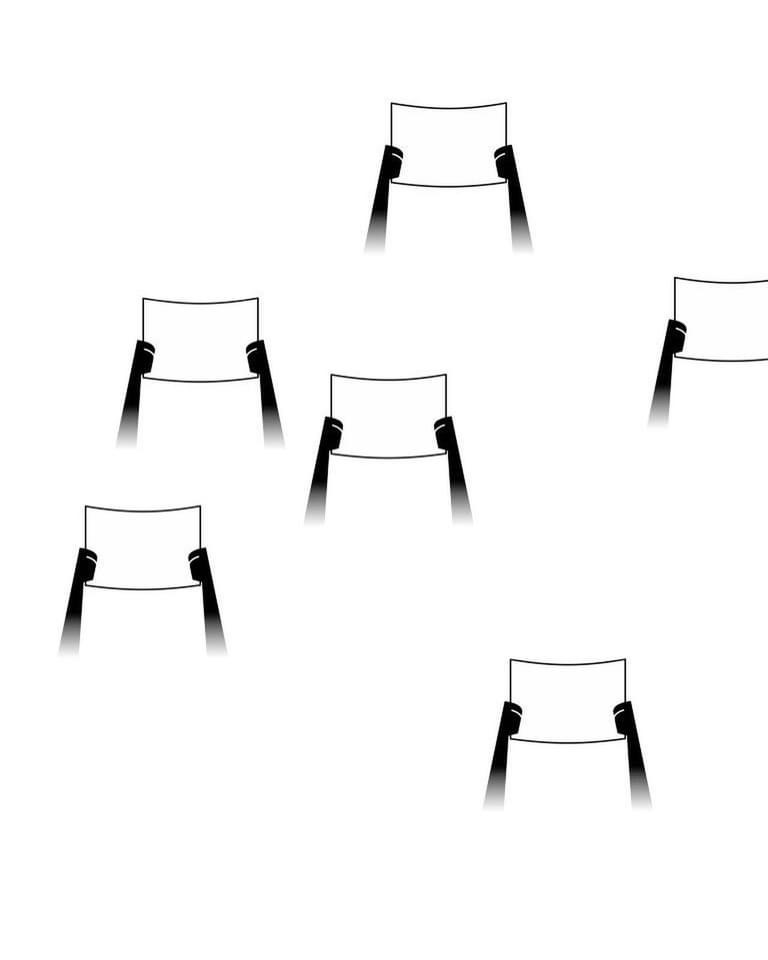 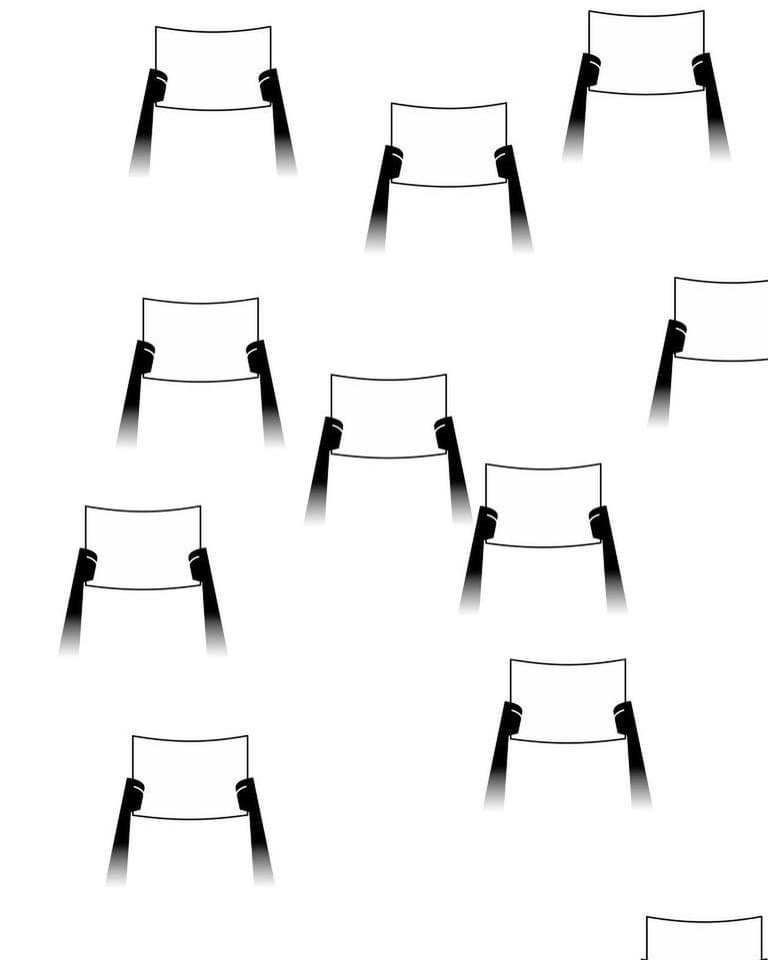 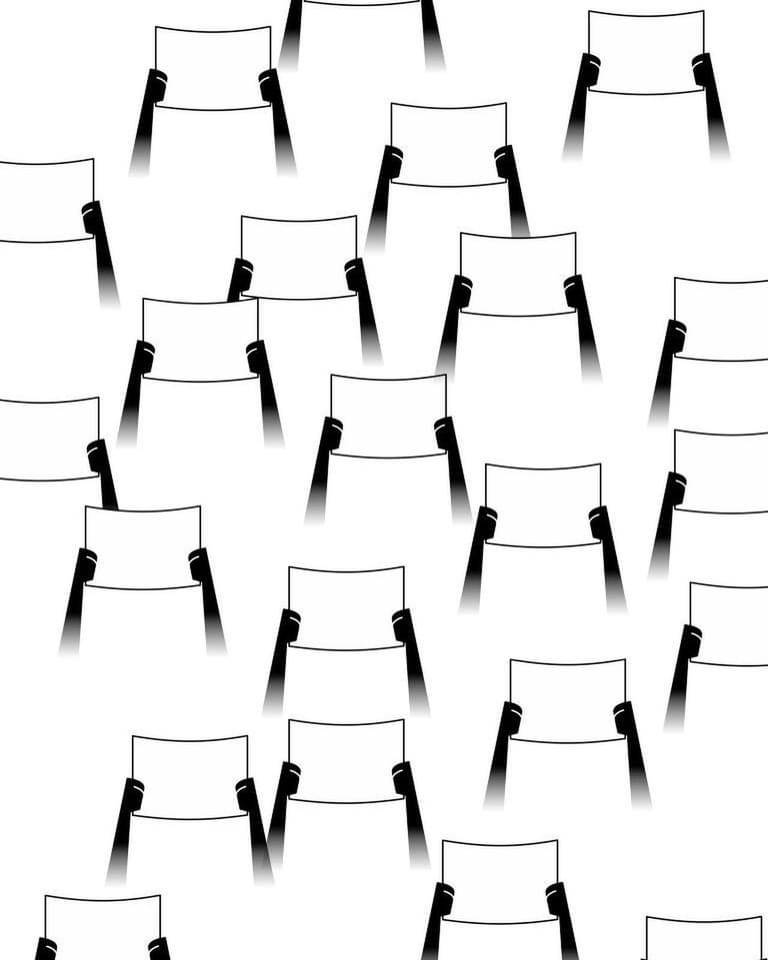 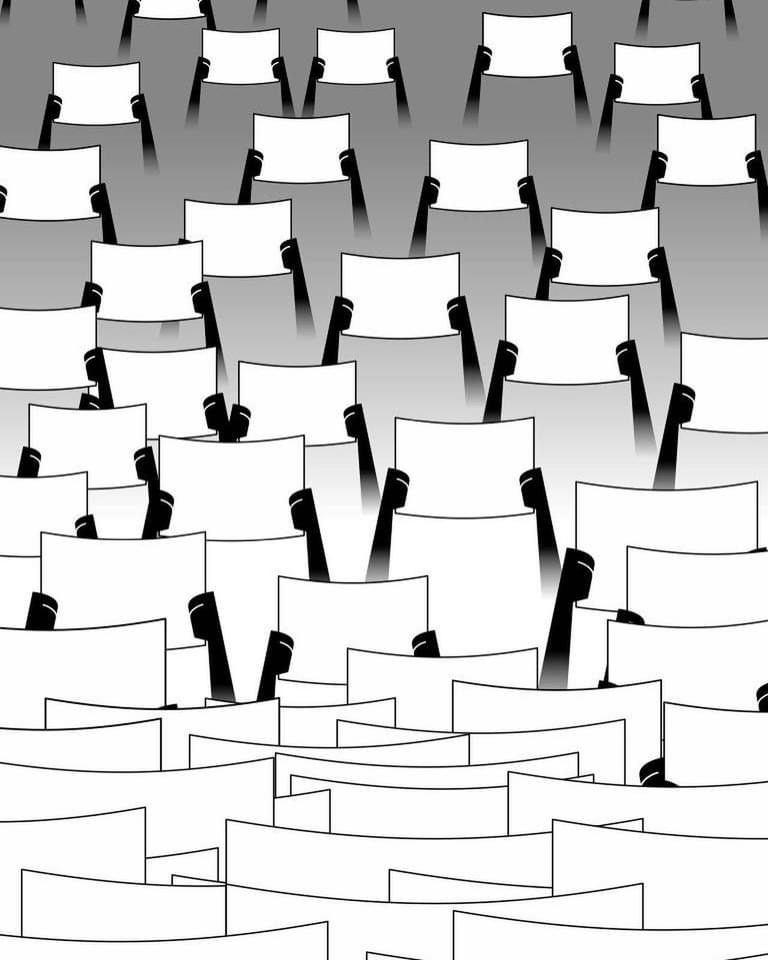