In Buddhism, the expression ‘turtle fur and rabbit horns’ 龜毛兔角 guī máo tù jiǎo denotes an absurdity, something that is non-existent, a fiction or an impossibility. Similarly, to seek enlightenment in some impossible ideal retreat is as futile as searching for a jackalope — a jackrabbit-antelope — 離世覓菩提，恰如求兔角。According to a far more venerable Chinese tradition, rabbits sprout antlers and turtles start growing hair when war looms.

Before we contemplate the possibilities of a new year’s menagerie, we reflect on the Year of the Tiger that has just passed. We used the expression 虎頭蛇尾 hǔ tóu shé wěi — ‘tiger head snake tail’ — as the rubric for our envoi to the year, The Tail-end of Tiger Tyranny. ‘Tiger head snake tail’ refers to blustering deception and the disparity between what is said and what is done. We used it to express the fierce progress of the Year of the Tiger and the absurdly cruel twists and turns of its denouement.

The dying days of the Year of the Tiger also bring to mind other well-known formulaic Chinese expressions, or clichés, featuring the word 虎 hǔ, ‘tiger’:

It was a year that proved the truth of an expression in the I Ching, an ancient oracle, that when rulers suddenly change tack their minions immediately follow their lead. Meanwhile, the wise people who avoid calling attention quietly prove their true worth大人虎變，小人革面，君子豹變. Everyone recalled the wisdom of the old saying that when you deal with a tyrannical ruler it’s as perilous as lying down with a tiger 伴君如伴虎. Moreover, having taken up with such a mercurial animal it’s all but impossible to break free 骑虎难下.

Despite the bitter lessons of the past, people in China appreciated once more that ‘a mountain cannot accommodate two tigers’ 一山不藏二虎 and that the best way for normal people to cope with the situation was to watch the powerful compete from a safe distance 坐山觀虎鬥. You have to be pretty foolhardy to think that you can bargain with a tiger for power 與虎謀皮. Cautious people are even too scared to talk about their overlords 談虎色變 and they are fearful that at some point ‘the tigers will grow wings’ 為虎添翼 and exercise ever greater control over their lives.

The events of 2022 illustrated the limitations of the Big Cat Xi Jinping, a man whose petty stature was more evident than any other time in his decade-long rule 照猫畫虎. It was obvious that even though he poses as the King of the Jungle, more often than not he simply comes off looking pretty mangey 畫虎不成反類犬. And, while the majority are scared of everything 前怕狼後怕虎, the people who participated in the Blank Page Rebellion proved yet again that ‘young calves can be fearless when faced with a threat ‘ 乳犢不怕虎. It was a salutary reminder, if any was needed, that China bristles with hidden talents 藏龍臥虎.

Some of those who would swat flies on the head of tiger 老虎頭上撲蒼蠅 or tug its whiskers 老虎扳鬚did end up suffering the consequences, while others were relieved to have survived a mauling 虎口餘生.

For all of the Tiger’s evil glare 虎視眈眈 and the need to give Him a wide berth 餓虎之蹊, everyone is more aware than ever of how often he gets things completely wrong 魯魚帝虎 and thinks that he can just fudge it 馬馬虎虎. Not that this makes any difference. As the old saying goes:

When there is no real tiger on the mountain,
even a monkey will claim to be the King of Beasts.

As fireworks bring in the Lunar New Year with a bang, the whimper of the deadly Year of the Tiger continues to resonate. Something encapsulated in the expression 虎頭蛇尾 hǔ tóu shé wěi.

Here we celebrate the arrival of the Guimao Year of the Rabbit 癸卯兔年 in the company of Wu Fei, Lao Shu, Huang Yongyu, He Yuhuai, Catherine Churchman, Chen Qiushi and Liu Chan. Here the work of Huang Yongyu enjoys particularly prominence. Yongyu and I first met in 1981 and, in 1983, he granted me permission to translate his celebrated collection of illustrated aphorisms. We included selections from Can of Worms 罐齋雜記 both in the first edition of Seeds of Fire: Chinese voices of conscience in 1986 and again on the website for the documentary film Morning Sun in 2003. New Sinology Jottings in China Heritage has also benefitted both from Yongyu’s earlier and from his more recent work, as has the series Homo Xinensis.

May the Year of the Rabbit not be our last 入兔不入土. To quote an aria from The Drunken Beauty 貴妃醉酒, a short Peking Opera created and made famous by Mei Lanfang 梅蘭芳:

To listen to the artist Wu Fei’s rendition of this aria, click here.

This Lunar New Year’s greeting is both a chapter in The Other China and an appendix in Xi Jinping’s Empire of Tedium. Our thanks to Callum Smith for designing our New Year’s card, ‘It is what it is. Now what?’ 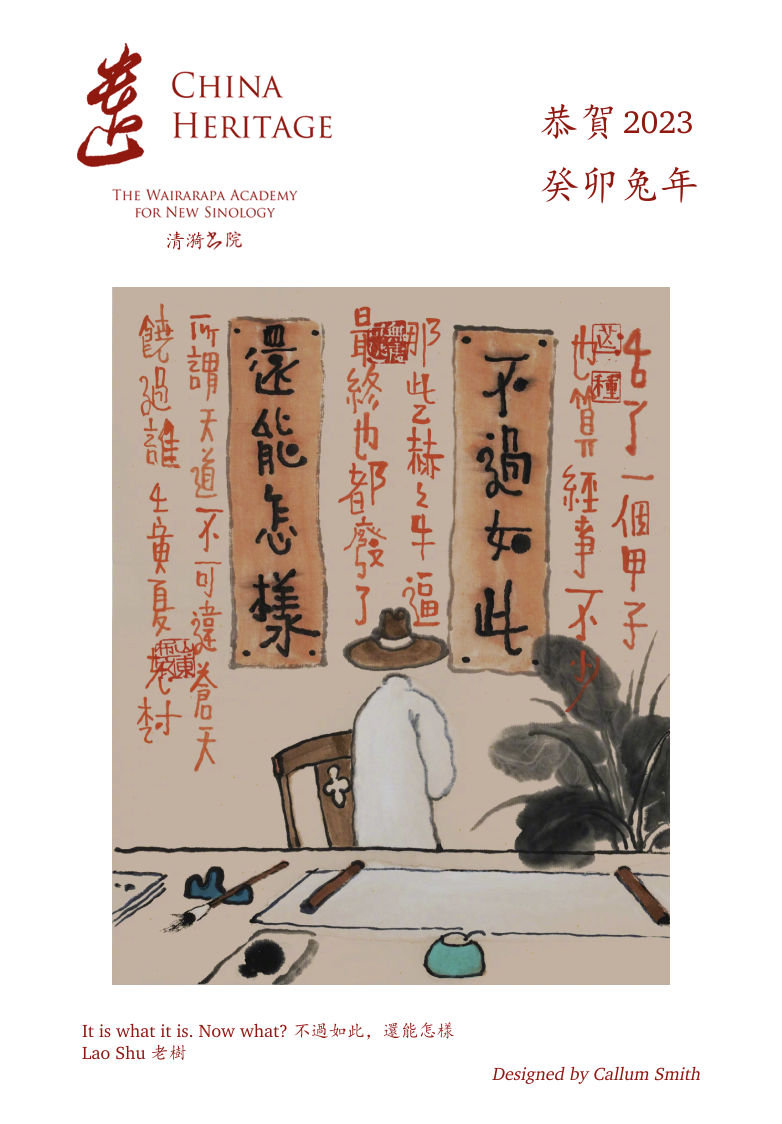 It is what it is.
Now what?

I’ve lived a full cycle of sixty years
and have had my fair share of experiences.
All the people who thought they were such a big deal
Ended up as a pile of crap.

Guess that’s what they mean when they say:

‘The way Heaven triumphs in the end,
and no one ever gets away with anything’

We Are Where We Are

The Year of the Monkey 丙申猴年

The Year of the Rooster 丁酉雞年

The Year of the Dog 戊戌狗年

The Year of the Pig 己亥豬年

The Year of the Ox 辛丑牛年

The Year of the Tiger 壬寅虎年

Farewell the Old
Ring in the New 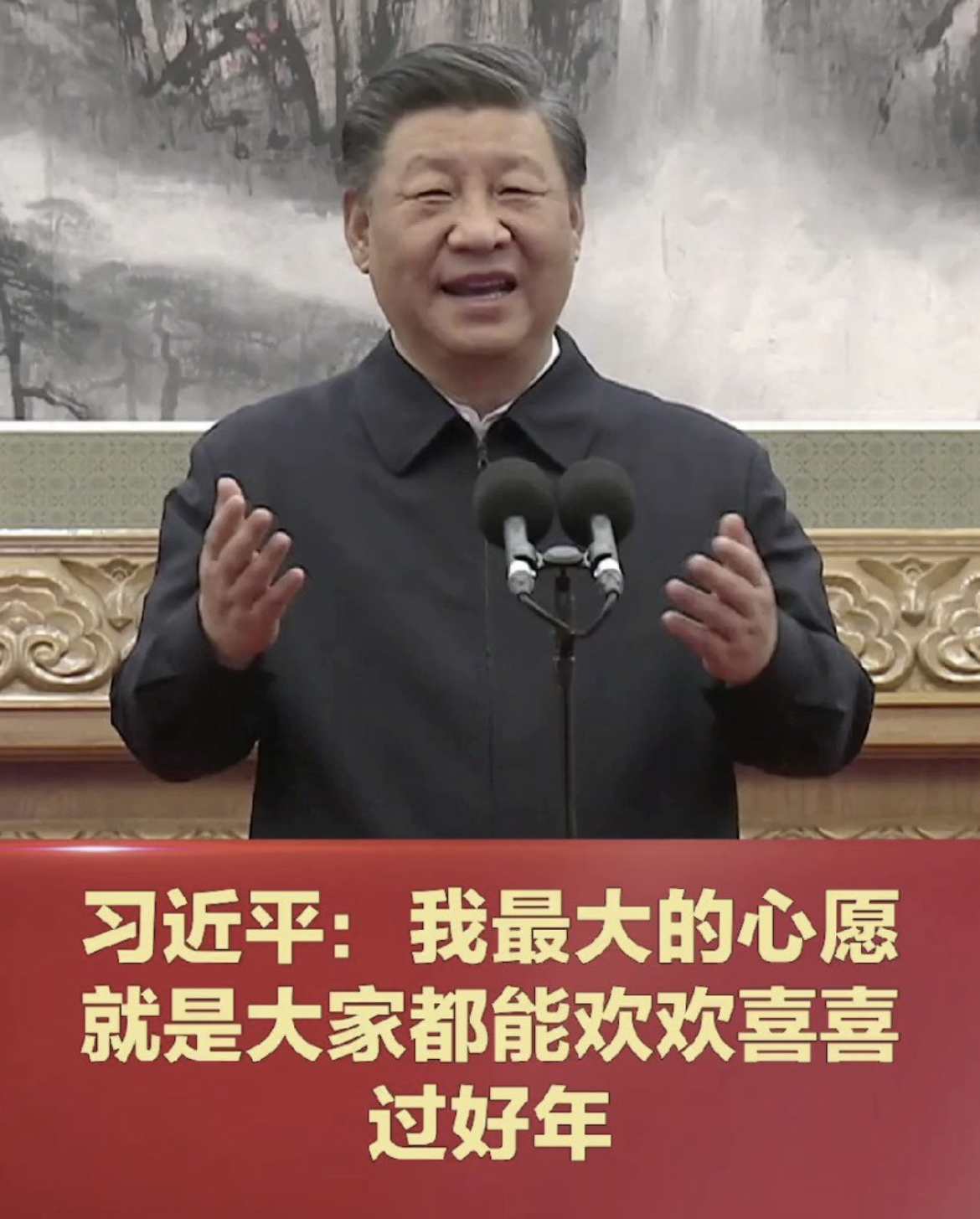 In his Lunar New Year’s message, Xi Jinping told the nation that:

‘My sincere hope is that everyone will have a joyous New Year celebration.’

However, as one online commentator responded:

‘If you’d lost five relatives in the past fortnight, would you be in the mood to celebrate the new year joyously?’

Lao Shu’s Tiger under the Weather 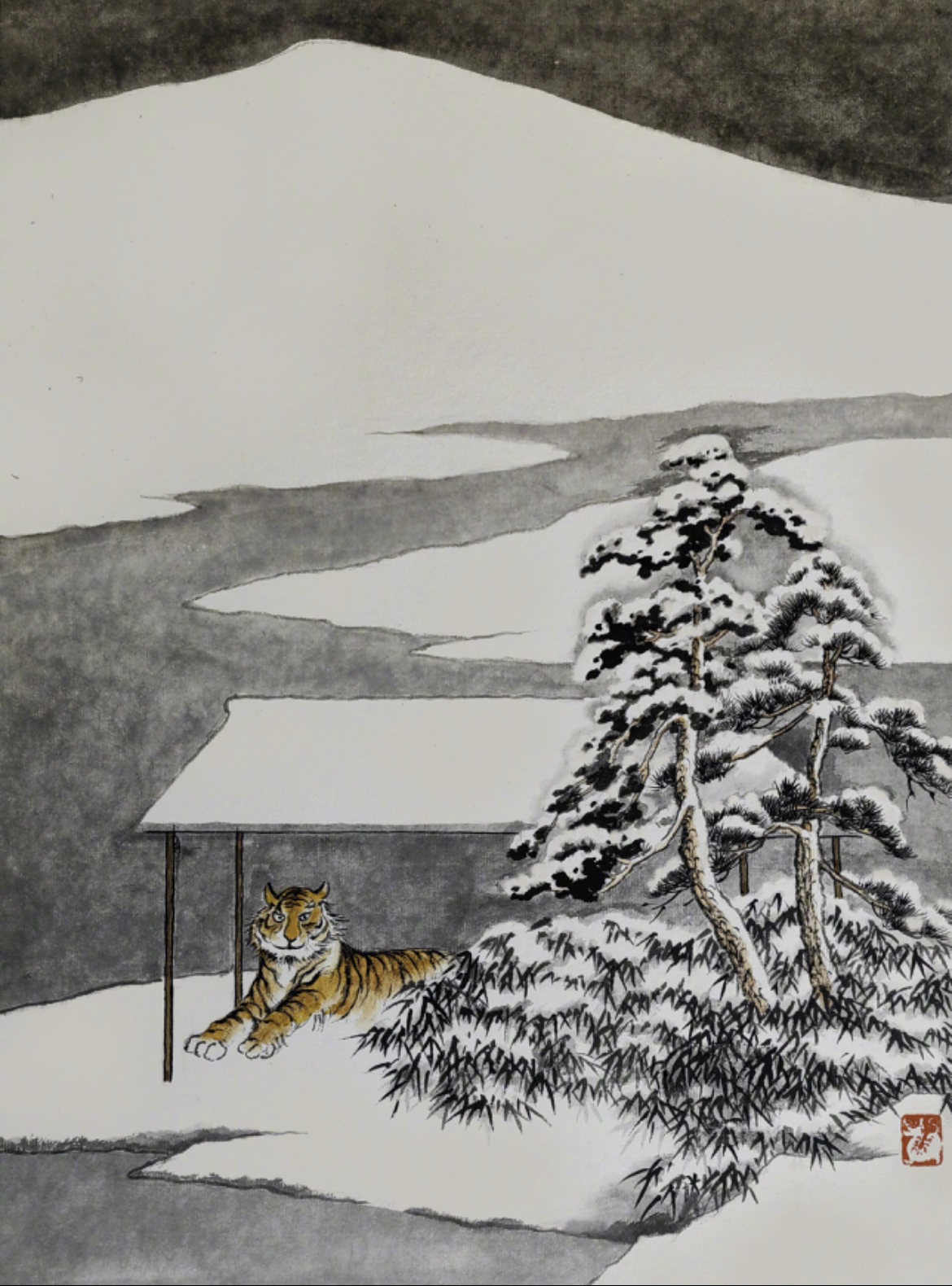 Three years of disease, how many winters can anyone survive?
Common folk are scrambling for medicine, while those fools keep grandstanding.
Everyone’s in a state of mental distress as all of our lives hang in the balance.
If spring really is on the way I hope it blows a few warm gusts in my direction

This Road to Recovery

The lockdown finally lifted
And a tsunami of infections struck.
Things have been dire and deadly
With desperate searches for medicine.
Once you’re negative you feel free to gambol,
While those still positive isolate at home.
I’m sit here all alone late at night
As flurries of snow swirl around.

The Rabbit from Hell

What a Stamp Says about Where China is Headed

Who the fuck designed this New Year’s Stamp? No Jade Rabbit here, instead it is a creepy rodent with fiery eyes, blood-engorged maw, a black mohawk, indigo pelt and humanoid hands… With that feral smirk and ravenous attitude it’s Hell’s Coney!

Those human-looking hands are particularly grotesque. In one hand this denizen is wielding a pen — a modern-day version of the King of Hell’s brush of judgement with which he passes sentence on the dead — and in the other he’s brandishing the Karmic Record that contains all the deeds of the deceased. In the top left-hand corner they’ve even printed ‘120’ — that’s the emergency telephone number!

People are saying that only an artist suffering from a complete aesthetic collapse would have produced such an odious and ill-proportioned rabbit. Utterly absent are the warm and fuzzy feelings that we traditionally associate with animals of the Chinese zodiac. For their part, zoologists tell us that only an albino rabbit would have red eyes like that. Some kind of sudden genetic mutation is obviously at work …

It looks like Lunar New Year stamps have become a form of prophecy. The message here is that unless the Big Red Dragon [i.e., Xi Jinping] falls, this ominous Bunny from Hell won’t grant good fortune to the Chinese.

The ‘bunny from hell’ proved to be a clever marketing ploy and the controversy surrounding Huang Yongyu’s stamp helped boost sales for China Post, which had been made into a state-owned enterprise in 2019. The ninety-nine year-old artist, who was a famous wag, also appeared to relish the kerfuffle. (See Wu Haiyun, How an Aging Artist Put His Stamp on the New Year, Sixth Tone, 21 January 2023.)

[Note: For an essay on Huang Yongyu and Mao Zedong’s birthday, see 陰魂不散 — Tedium Continued — Mao more than ever, 26 December 2022.]

The Last Generation in a New Year

The Passive Resistance of the Garlic Chives

Quit quietly and face down the tyranny by copping out:

Don’t get a mortgage, don’t have kids and don’t buy into old age care.

They make up all the rules so confrontation is futile. Since open defiance is violently repressed, I’m just gonna sit it out.

You do you, I’m calling it quits.

Nothing Ever Stays the Same

Impermanence. At this peak in the Covid crisis countless tragedies are unfolding:

Fourteen people killed by a rogue driver in Handan, Hebei province; a passenger run over three times by a Didi taxi driver in Hangzhou; a plane full of people crashed in Teng county, Guangxi province, killing all onboard; two people jumped to their deaths from an apartment building in Yanjiao north of Beijing …

Life is truly unpredictable. One can only hope that the quick stay safe while the dead find peace.

I appeal to people not to give in to despair and commit suicide for as long as there is life, there is hope.

Impermanence. Although all good things must come to an end, that is equally true in the case of bad things as well. I do not believe this darkness is endless. Herewith I record this moment.