In Nouvelle Chinoiserie we introduce literary texts and translations aimed at students of traditional Chinese letters who are interested in the world that lies beyond the narrow confines and demands of contemporary institutional pedagogy. They also reflect the long-term interest of The Wairarapa Academy for New Sinology in ‘cultivation’ 修養.

The translation is followed by the Chinese original.

It is interesting that two of Pu Songling’s early translators chose this story for inclusion in their brief anthologies. It forms the ninth of Rose Quong’s forty tales in her Chinese Ghost and Love Stories (London: Dennis Dobson, 1947), entitled rather puzzlingly ‘Dreaming of the Scholar Feng-yang’. Quong (鄺如絲, 1879-1972) was an Australian-Chinese from Melbourne, who later made a name for herself in England and in the United States, as an actress and later as a purveyor of Chinoiserie (for details, see the entry on her by Angela Woollacott in the 2005 edition of the Australian Dictionary of Biography).

As Judith Zeitlin points out, this tale is to a certain extent derived from three earlier classical tales 傳奇 from the Tang dynasty, including one by Bo Xingjian 白行簡, the brother of the poet Bo Juyi 白居易, simply entitled ‘A Story of Three Dreams’ 三夢記 (see Zeitlin, Historian of the Strange, p.157 ff., referring to Allan Barr’s 1983 Oxford doctoral dissertation). Incidentally, all of these materials are conveniently included in the invaluable volume by 朱一玄, 《聊齋誌異資料匯編》 , 天津: 南開大學, 2002.

Zeitlin summarizes the story’s theme a little simplistically: ‘Dreams of desire may also suddenly give way to nightmares of anxiety.’ She continues somewhat speculatively: ‘The beautiful lady is both the wife’s double and her rival, the embodiment of the dual nature of her desire and her fears.’ Zeitlin helpfully translates the comment by Dan Minglun (但明倫, 1782-1853), one of the earliest commentators on Strange Tales. Dan is commenting on the beautiful lady’s seductive song:

‘Every line and every word were conceived by the wife in a state of extreme longing, but now they are being sung by the beautiful lady; the lady’s song ends up supplying the words to seduce the wife’s husband — this is really hard to bear!’

Feng Zhenluan Feng Zhenluan (馮鎮巒, 1760-1830) finds the whole scene (and the rather vulgar tone of the song itself) reminiscent of the novel Golden Lotus 金瓶梅. In Ma Zhenfang’s modern compendium — 馬振方編,《聊齋誌異評賞大成》, 麗江, 1992; 臺北: 建安, 1996 — Fan Yihong praises the tale’s psychological realism, but regrets the superstitious dimension of the ending in which all three dreams are shown to have been identical. And yet this surely lies at the very heart of Pu Songling’s intentions.

In this respect, nearly all modern Mainland critics of both Strange Tales and of the slightly later Story of the Stone 紅樓夢 are severely hampered by their ideological inability to accept the interweaving of ‘reality’ and ‘illusion’, the juxtaposition of waking life and of the dream state, the ambivalence of what Cao Xueqin calls ‘truth’ 真 and ‘fiction’ 假. The old commentator Feng Zhenluan, by contrast, praises this ending. 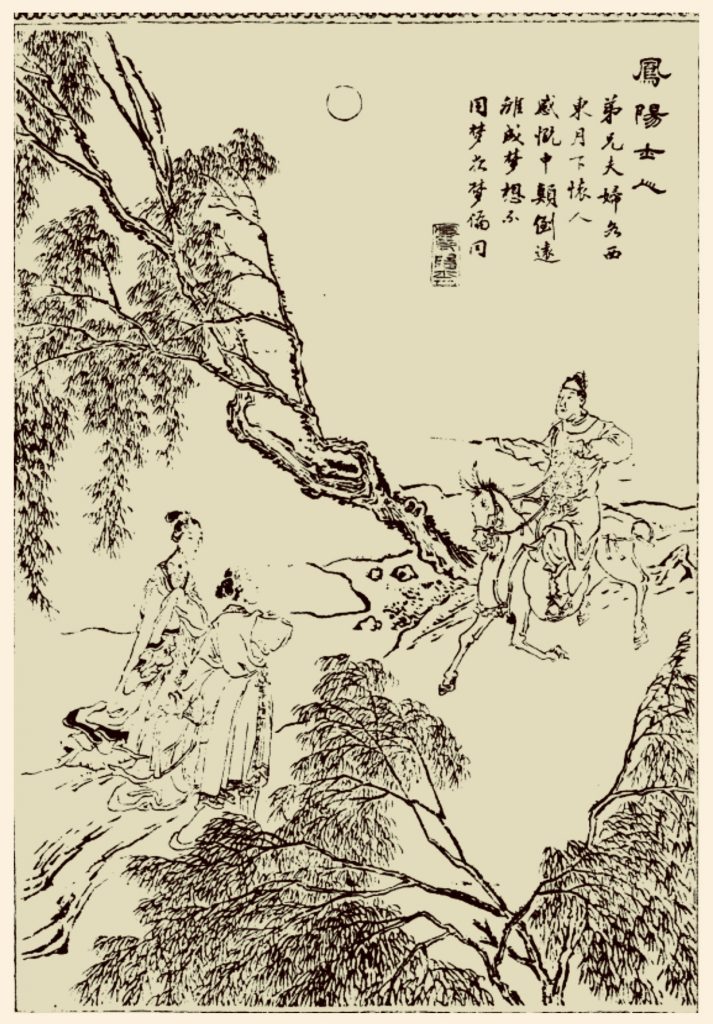 A certain gentleman of Fengyang in the province of Anhui went off on a long study trip taking his books with him. He told his wife to expect him back in six months’ time. Ten months went by, however, and there was still no news of him. His wife pined for him sorely.

One night, she rested her lonely head on her pillow, her heart filled with the anguish of separation. The moon was shining through the gauze casement, casting a wavering shadow in her chamber, as she lay in her bed restlessly tossing and turning, when suddenly a most beautiful lady, with pearls in her hair, clad in a crimson gown, parted the curtains of her bedstead and addressed her, smiling:

‘Sister, are you not yearning to see your husband once again?’

She rose at once from her bed and answered:

The beautiful lady invited her to follow her, urging her to put aside any concerns she might have as to the length of the journey. She took her by the hand, and together they walked out into the moonlit night. After about the distance of an arrow’s flight, she was hobbling along and the beautiful stranger was already outstripping her. She asked the lady to wait while she returned home to fetch a new pair of shoes. But the lady instead led her to the side of the road, and bidding her to be seated, took off her own shoes and offered them to her. She gladly accepted, and put them on at once. Luckily they were a perfect fit. And so the two of them set off again on their journey. Now she felt as if her feet had grown wings.

A little later, she espied her husband coming towards them, riding a white mule. He seemed greatly startled to see them, and dismounted at once.

‘Where are you going?’ he asked.

‘I was on my way to visit you,’ she replied.

He asked her who her beautiful companion was. Before his wife could reply, the lady raised her hand to her mouth and said with a smile:

‘Do not bother her with questions. She has travelled far to come here and be with you. And you too sir must be tired after travelling half the night, as must your mule. My own home is close by. Please be my guests, come and rest in my house. You can set off again in the morning and be home in plenty of time.’

A little further on they came to a village and the three of them halted before a courtyard house. Here the beautiful stranger roused her sleeping maidservants and instructed them to welcome her guests.

‘Tonight the moon is bright and we have no need of candles. Let us sit here outside on the terrace on this stone bench.’

The gentleman tethered his mule beneath the eaves of the house, and they sat down.

‘Surely my shoes must have been too large for you,’ said the fair lady to his wife. ‘They must have caused you considerable discomfort on the way. Since you will be riding home tomorrow, would you be so kind as to let me have them back?’

The wife returned them with thanks. Shortly thereafter wine and food were served. The fair lady poured the wine herself.

‘You two have been apart for so long,’ she said. ‘We should celebrate tonight’s reunion!’

The gentleman responded to her toast, and drained his goblet. He and the fair one talked and laughed together animatedly, and a certain amount of foot-tapping began to take place beneath the table.  He could not keep his eyes off her, and made a series of highly suggestive remarks. Between husband and wife, by contrast, after their long separation, hardly a word passed.

The fair lady kept flashing her eyes at the gentleman, bewitching him with subtle words of seduction, while the wife sat there silently, feigning indifference. Eventually the two grew quite tipsy, and their conversation became more and more intimate and salacious. The fair lady pressed on him a large horn-cup of wine, which he at first declined, saying he was already drunk. She insisted, and he laughed:

She agreed to sing for him, and taking her ivory-inlaid plectrum in her hand, she plucked the strings of her zither and began to sing:

Twilight falls, I put my finery aside,
A cool west wind blows through the gauze casement.
The plantain leaves rustle,
The rain descends in wave upon wave.
To whom is he whispering sweet nothings tonight?

I gaze across the endless autumn waters,
But he does not return.
My cheeks are wet with streaming tears.
I long for him, for him I yearn:
And yet he brings me nought but pain!
A crimson broidered slipper in my hand,
I ask the spirits: ‘Will he ever come home again?’

She ceased her song, and smiled at him:

‘That was just a local ditty, hardly worth your listening to. But it’s rather popular in these parts, so I thought I might sing it for your pleasure.’

She had indeed sung in a most sensuous manner, and there was no mistaking her seductive intent. The gentleman was by now quite undone, and could contain himself no longer. After a moment, feigning drunkenness she withdrew from the terrace, and he rose and followed her immediately indoors. They were absent a long while. The maidservants grew tired and lay down to sleep on the verandah.

The wife sat there alone out on the terrace, wrestling with her loneliness, her intense misery mingled with anger and indignation. She half wished to escape and return home. But the night was dark and she did not know the way, so she hesitated. Finally she rose and went indoors to spy on them. As she came near their window, she detected the unmistakeable sounds of love-making — the ‘wisps of cloud releasing drops of rain’. Then she heard her husband speaking intimately with the fair stranger, and recognized the very same obscene expressions he had once spoken to her. By now she was shaking violently and her heart was thumping in her breast. It was more than she could bear. She wanted to crawl into a ditch somewhere and die.

Returning angrily to the terrace, suddenly she caught sight of her brother Sanlang arriving at the house on horseback. He dismounted and she told him the story of her husband’s infidelity. He flew into a mighty rage and went storming into the house with her. They found the door of the lady’s bedchamber barred and bolted, while intimate lovers’ voices were still audible within. The brother lifted up a great rock, and hurled it through the window-frame, smashing it into half a dozen pieces. A frantic cry was heard from within.

‘Alas my poor darling! Your head is quite broken in!’

The wife was greatly shocked when she heard this, and burst out sobbing to her brother:

‘I never asked you to kill my husband! Now what will we do?’

Her brother stared at her wide-eyed.

‘You cried to me for help! So I rubbed out this blot from our lives! And now you take his part, and turn against me! Your whims are really too much to bear!’

He turned on his heel and was about to leave. She clung to him.

‘Take me with you! Else what will become of me?’

But he cast her off and having thrown her to the ground, he made good his escape.

Suddenly the wife awoke and knew it that it had all been a dream.

The very next day her husband did indeed return, riding a white mule. She marvelled at this within herself, but said nothing.  Now, it transpired that the previous night, he too had had a dream. When he told her of it, they were both utterly astounded to discover that it corresponded in every detail with her own.

Her brother learned that his brother-in-law was back from his travels, and came over to welcome him home. In the course of conversation, he said casually:

‘Last night I dreamed that you had returned, and now here you are! Isn’t that strange?’

‘And luckily, I haven’t actually been crushed to death by a great rock!’

‘What on earth do you mean?’ asked the other in amazement.

When he heard the whole story of their shared dream, he too marvelled at it greatly.

That very night, he dreamed that he had found his sister weeping and pleading with him for help, and that in his rage he had hurled a great rock at her husband. So all three dreams tallied exactly. But no one ever discovered the identity of the beautiful lady.