China Heritage commemorates the twentieth anniversary of mainland China extending suzerainty over Hong Kong with a series of translations, commentaries and art works.

In the first in the series we start with a poem by the celebrated Hong Kong writer P.K. Leung (1949-2013). Written a year prior to the 1997 takeover, ‘Cauldron’ is a meditation on the return of P.K.’s home town to the embrace of China. This is followed by the menu of the welcome banquet held for China’s party-state leader, Xi Jinping, on 30 June 2017, the day prior to the formal celebration and fireworks on the 1st of July.

We then sample the speech Xi made on the actual day — one which employed the folderol of New China Newspeak — a statement of policy that contained dark warnings to the people of Hong Kong (it was pointedly given only after Xi, Chairman of China’s Central Military Commission, had reviewed People’s Liberation Army troops stationed in the city). This is followed by a menu from the restaurant M at the Fringe dating from 30 June 1997. We then revisit some observations by Lu Xun on banquets and Chinese civilisation before concluding with two selections from ‘A Spectre Prowls Our Land’ by the Sichuan poet Sun Jingxuan. A theme that unites Lu Xun and Sun Jingxuan is the ‘soy-vat culture’ 醬缸文化 of China.

Thus, it is our aim to add a few discordant notes to the monotonously orchestrated festivities of the twentieth anniversary from the sidelines.

The grand banquet commenced, noblemen and elders took the
places of honour;
while savage fauna bubbled restlessly in the cauldron,
a sober phoenix motif replaced the gruesome mask of the Beast.

Our humble bellies have ingested a surfeit of treachery, eaten their fill of history, wolfed down legends —
and still the banquet goes on, leaving
an unfilled void in an ever-changing structure.
Constantly we become food for our own consumption.
For fear of forgetting we swallow our loved ones,
we masticate our memories and our stomachs rumble
as we look outwards.

Creation’s aspirations are trussed,
caught tight by the luminous bronze.
In his campaign against the Chu, the southern state,
as the Emperor approached the wilderness beyond the Central Plain,
ten thousand bawled for the rustics beyond the pale,
to make their low bow of homage;
stone and metal engraved; vessels fashioned; tintinnabulations of history.

The proclamations sit heavy on the stomach,
destroy the appetite;
the table is altogether overdone.

May I abstain from the rich banquet menu,
eat my simple fare, my gruel, my wild vegetables,
cook them, share them with you?

Is there a chance
your pomp and circumstance could ever change,
evolve
slowly
into a new motif,
some new arabesque
of beauty?

— Translated by John Minford and Can Oi-sum

The menu of the banquet held in honour Xi Jinping’s 2017 visit to Hong Kong. During the meal Xi made his umpteenth ‘important speech’ 重要講話. 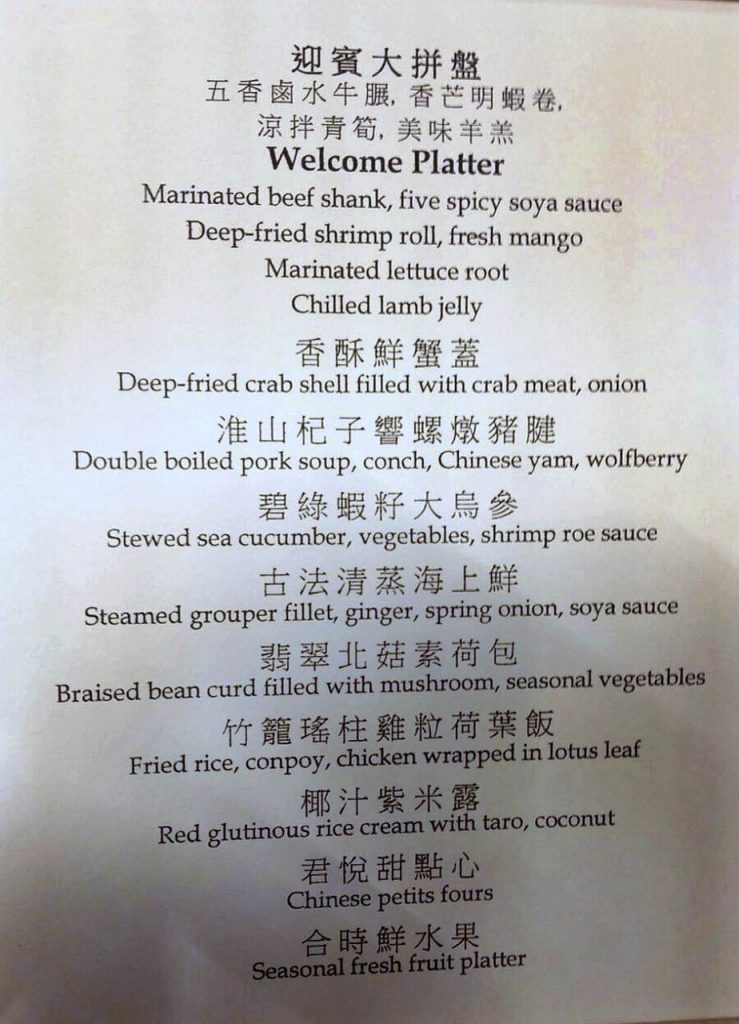 In another actually very ‘important speech’, one exuding menace, the following day, 1 July, Xi referred obliquely to the politcal unrest of recent years and made it abundantly clear that, in the view of Beijing, Hong Kong and its people could not afford to be sidetracked by such things or to deplete themselves with internal wrangling 經不起折騰，經不起內耗. [On the term zhēteng 折騰, see our Heritage Glossary here.] The answer, he declared unequivocally, was unity, increased political education and indoctrination in schools and in all matters of principle deference to Beijing, the sole source of authority in China.

Xi might have been addressing himself to Hong Kong, but it was not a territory grounded in a unique globalised Chinese history that was in his purview, but rather it was a new confabulation, one born of a strategy announced earlier in the year that would favour the unified politico-economic region to be known as ‘Guangdong-Hong Kong-Macao-Big Bay’ 粵港澳大灣區, ridiculously called ‘GHMBBA’.

Xi also took the opportunity to tell the people of Hong Kong in no uncertain terms that whereas the slogan might be ‘One Country, Two Systems’ 一國兩制, the reality is that the country, China (i.e., the Communist party-state), and the will of Beijing override everything else; two systems are merely the stuff of the one country.

‘This is the root’, he declared, and only when the root is firmly grounded can everyone benefit from the resulting growth of the tree. He darkly declared, therefore, any and all activities that contravene such an understanding or are deemed to have ‘crossed the line will in no way be tolerated’ 對底線的觸碰，是絕不能允許的。

Farewell at the Fringe

On a more delectable note, we are reminded that on 30 June 1997 the restaurant M at the Fringe boasted:

The last governor of Hong Kong, Chris Patten, enjoyed his farewell luncheon at M on the eve of his end. 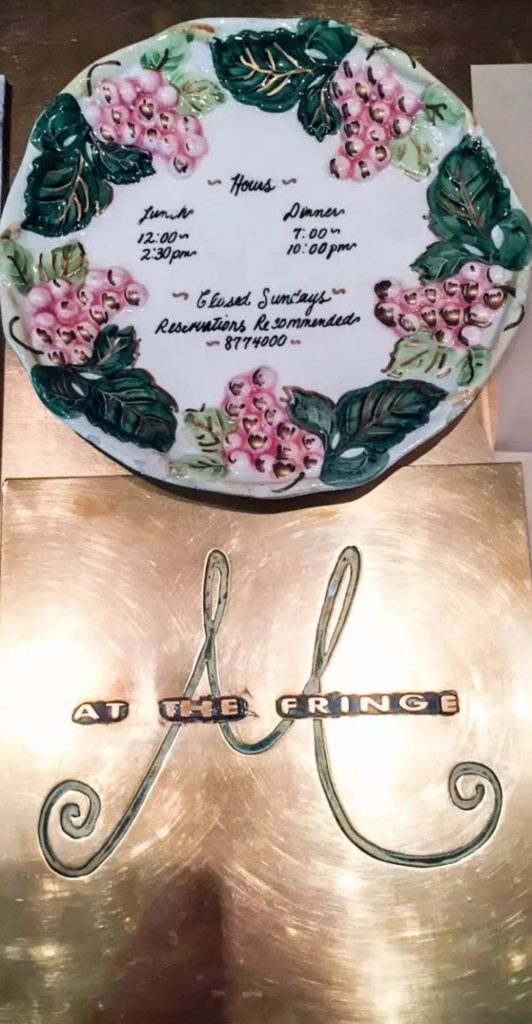 Our vaunted Chinese civilisation is only a feast of human flesh prepared for the rich and mighty. And China is only the kitchen where these feasts are prepared. Those who praise China because they do not know this are excusable, but the rest deserve to be condemned forever! 所謂中國的文明者，其實不過是安排給闊人享用的人肉的筵宴。所謂中國者，其實不過是安排這人肉的筵宴的廚房。不知道而讚頌者是可恕的，否則，此輩當得永遠的詛咒！

Those foreigners who praise us, not knowing this, are excusable. And so are those whose high position and pampered life have made them dull-witted and blind. But there are two other types. One considers the Chinese an inferior race which deserves to be no better off than it is, and therefore deliberately commend all that is old in China. The other likes every country to look different in order to make travelling more interesting… . Both these types are detestable… . 外國人中，不知道而讚頌者，是可恕的；佔了高位，養尊處優，因此受了蠱惑，昧卻靈性而讚歎者，也還可恕的。可是還有兩種，其一是以中國人為劣種，只配悉照原來模樣，因而故意稱讚中國的舊物。其一是願世間人各不相同以增自己旅行的興趣。這些都可憎惡。… .

Foreigners are not the only ones to be intoxicated by this civilisation: every Chinese too is smiling in intoxication. Because the hierarchy handed down since ancient times has estranged them from each other, they cannot feel each other’s pain; and because each can hope to enslave and eat other men, he forgets that he may be enslaved and eaten himself. Thus since the dawn of civilisation countless feasts — large and small‚ of human flesh have been spread, and those at these feasts eat others and are eaten themselves; by the anguished cries of the weak, to say nothing of the women and the children, are drowned in the senseless clamour of the murderers. 這文明，不但使外國人陶醉，也早使中國一切人們無不陶醉而且至於含笑。因為古代傳來而至今還在的許多差別，使人們各各分離，遂不能再感到別人的痛苦；並且因為自己各有奴使別人，吃掉別人的希望，便也就忘卻自己同有被奴使被吃掉的將來。於是大小無數的人肉的筵宴，即從有文明以來一直排到現在，人們就在這會場中吃人，被吃，以凶人的愚妄的歡呼，將悲慘的弱者的呼號遮掩，更不消說女人和小兒。

Feasts of human flesh are still being spread, even now, and many people want them to continue. To sweep away these man-eaters, overturn these feasts and destroy this kitchen is the task of the young folk today! 這人肉的筵宴現在還排著，有許多人還想一直排下去。掃蕩這些食人者，掀掉這筵席，毀坏這廚房，則是現在的青年的使命！

A Spectre Prowls Our Land
一個幽靈在中國大地遊蕩

… Have you seen
The Spectre prowling our land?

You may not recognise him,
though he stands before your eyes,
For like a conjurer,
master of a never-ending transforming,
One moment in a dragon-robe of gold brocade
He clasps the dragon-headed sceptre,
The next in courtier’s gown
He swaggers through the palace halls;
And now — behold — a fresh veneer!
The latest fashion! And yet
No mask, no costume, no disguise
Can hide the coiled dragon
branded on his naked rump…

China, like a huge dragon, gobbles all in its path,
Like a huge vat, dyes all the same colour.
Have you not seen the lions of Africa,
the lions of America,
Fierce kings of the jungle?
When they enter our dragon’s lair
they become mere guard-gods,
rings through their pug nostrils,
standing guard at yamen and palace gate…