Bao Tong 鮑彤, a prominent reformer and aide to Zhao Ziyang, the Party General Secretary ousted by Deng Xiaoping and his colleagues in a ‘soft coup’ that accompanied the remorseless violence of the Beijing Massacre on June Fourth 1989, died in Beijing on the 9th of November 2022, four days after his ninetieth birthday.

After a lengthy period in jail following the Fourth of June, Bao spent decades under house arrest and under constant surveillance. On the occasion of his last birthday, Bao addressed his well-wishers:

‘In the vast flow of history, a single life is but a minuscule thing. As for my passage through life, it has been an honour to know you all and to share a heartfelt bond. Whether I’m ninety or not counts for little, what does matter is that we all continue to strive for a better future. We must also do what we can today, each in our own way. Do what you can, do what you must, and do it well.’

Pellucid slabs of ice were hewn from a frozen river and layered to construct a storied prison for the incarceration of effigies sculpted from barbed wire, the artist’s preferred medium. The images included men and women of conscience, both living and dead. Among their number were martyrs like Zhang Zhixin 張志新, the Nobel Laureate Liu Xiaobo 劉曉波, the renowned reformist Bao Tong 鮑彤, The Tiananmen Mothers, the novelist Yang Xianhui 楊顯惠, as well as other writers, academics and many others persecuted by Communist Party fiat. Nine of Ai Song’s original one-hundred sculptures were censored by the authorities. As a result the ‘wall of one hundred’ contained only ninety-one images. Xu Zhangrun’s image remained untouched and perhaps his words can help fill in the nine ‘memory holes’ created by the official interdiction.

The Wall of Ice stood for twenty-four hours following which Ai Song dismantled the edifice, releasing thereby the prisoner-avatars whom he had confined therein. Xu Zhangrun’s commemoration of the Wall of Ice — Shrouds of Ice on a River Incarnadine — offers permanence to that evanescent memorial by means of the written word, arguably the most hallowed tradition of Chinese culture.

The artist’s work is further transformed by the writer’s alchemy that transforms the particulars of today into a work relevant to a time yet unknown and unimaginable. Such word-memorials are written in a style that draws both on a millennia-old heritage and modern sensibilities. The result is what I have previously referred to as an ‘intersection with eternity’. Xu Zhangrun’s meditation is an impossible celebration; it is an elegy for human striving in the face of inhumane obstacles.

— from Xu Zhangrun 許章潤, ‘In Memoriam — Shrouds of Ice on a River Incarnadine’, China Heritage, 4 June 2020

This portrait of Bao Tong made out of barbed wire by the artist Ai Song was confiscated by Beijing Public Security in 2019 on the eve of the thirtieth anniversary of June Fourth. Portraits of Liu Xiaobo and seven others were also taken. Today, over three years later, they remain in police custody.

Bao Tong has now passed. It is incumbent upon the Beijing police to return this portrait to his children — his daughter, Bao Jian, and son, Bao Pu. It is private property and as such its rightful ownership is covered by the law.

A Poem of Remembrance

Bao Tong composed the following poem for Wu Wei 吳偉, his former secretary, in 2007 in remembrance of the decades of political stress that he had experienced. On the day of Bao’s demise, Gao Yu published the poem via Twitter, changing the words ‘more than twenty years’ 二十餘年 in the original poem to ‘thirty three years’ 三十三年. The second stanza reads in my translation:

Hard to sleep these thirty-three long years, let alone to dream.
I neither celebrate nor mourn; nothing surprises me.
I watch the changing weather idly from my window,
Dramas unfolding as far as the eye can see, just as
tides rise and fall as do the fortunes of humankind.
The hour is late as I hum this rhyme… 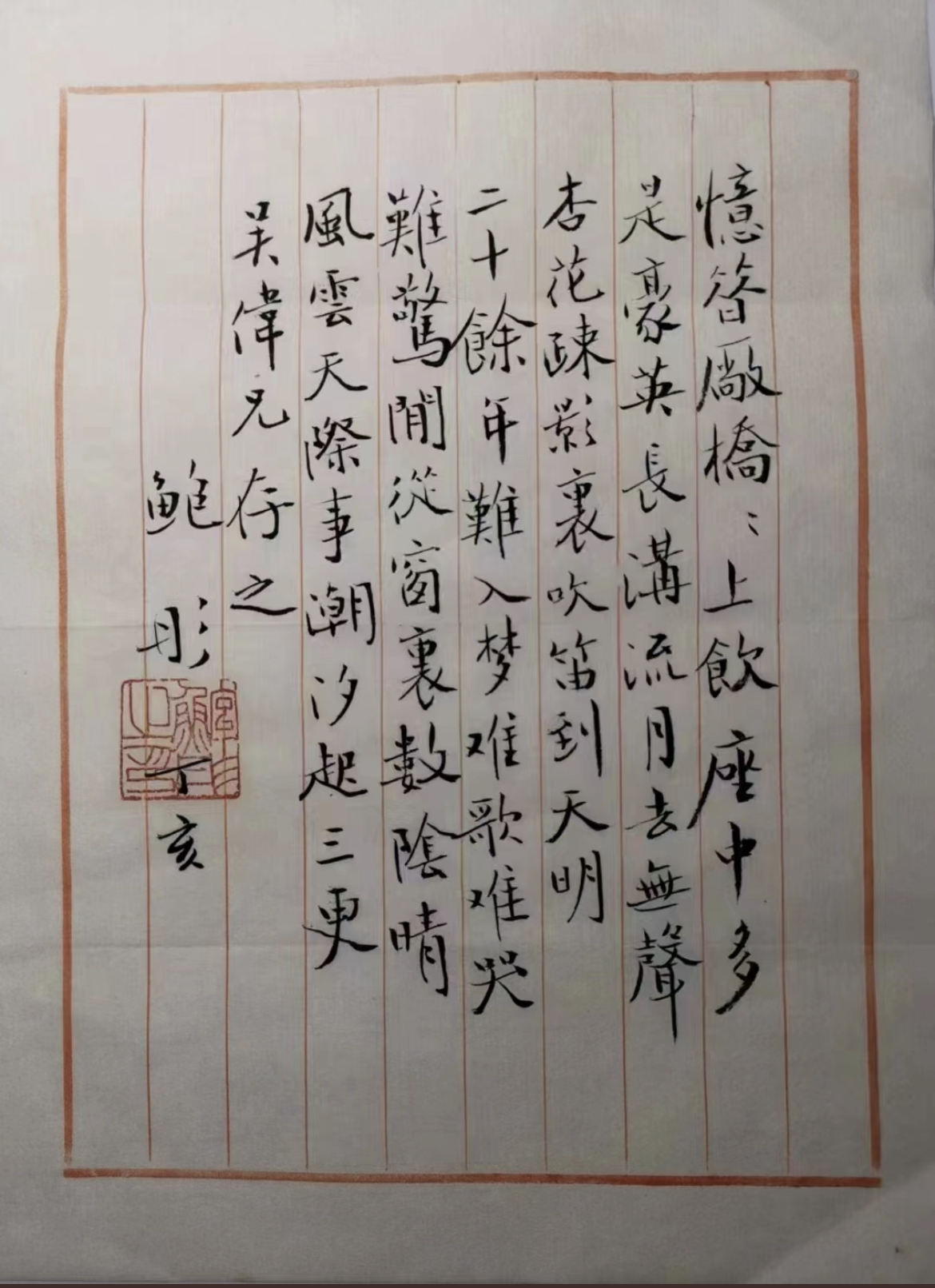