At the formal welcome ceremony held in the Great Hall of the People, the two mask-less Communists greeted each other with a handshake followed by an awkward embrace, a version of the ‘socialist fraternal embrace’, a practice that evolved in the Soviet bloc embodying the unique warmth between socialist leaders. (Long ago, Asian Communists replaced the Slavic-European ‘socialist fraternal kiss’ with the more coy clutch.) It was a rare moment of intimacy for Xi, if not for Nguyen.

The protocol for other members of  the high-level Vietnamese delegation required the wearing of masks and following the previously outmoded custom of what in China is known as 拱手禮 gǒng shǒu lǐ, ‘the ceremonial greeting of cupping the hands’, that is ‘to shake one’s own hand’, along with a 1/3rd bow.

The scene, featured in the video below, brought to mind an essay written by the Sinologist Barbara Mittler on the whence and wherefore of the forlorn practice of 拱手 gǒng shǒu, one that enjoyed renewed currency during the Covid emergency.

(Note: For the connoisseur, in martial arts culture 拱手禮 gǒng shǒu lǐ is referred to as 抱拳礼 bào quán lǐ. A more hallowed term for the custom is 作揖 zuò yī.)

Barbara Mittler is a professor of Sinology and Chinese Studies at Heidelberg University and a prolific scholar whose work ranges over print culture, intellectual history and China’s ongoing political transformation. She is also a member of the board of directors of the Forum Transregionale Studien.

We are grateful to Professor Mittler for permission to reprint the following essay, one which we enlist in our ongoing series of New Sinology Jottings, that is, essays that delve into the depths of Chinese history, tradition and practice, but with a light touch. For another essay in the series focussed on China’s Xi-Covid era, see Xi the Exterminator & the Perfection of Covid Wisdom (China Heritage, 1 September 2022), which is also an appendix in Xi Jinping’s Empire of Tedium.

The typographical style of the original has been retained.

Social Distance, Hygiene and the Handshake: a Chinese Perspective

Handshakes, no Hugs and no Bises: Greetings have changed radically with the new Coronavirus. Many probably still remember how, at the beginning of the pandemic in Europe, in early March 2020, Germany’s minister of the interior, Horst Seehofer, amiably rebuffed Chancellor Angela Merkel declining to shake her hand—she nods, understandingly and laughs before taking her seat, but the image goes around the world (Fig. 1).

The Guardian titles it “The End of the Handshake”[1] and explains: “In Beijing, the capital of the country where the outbreak began, red billboards tell people not to shake hands but to join their own hands together in a sign of greeting (the gong shou 拱手).”[2] Loudspeakers everywhere tell people to use this “traditional gesture.” And indeed, all over the Chinese-speaking world, as soon as the virus begins to spread, one reads the slogan zhi gong shou, bu wo shou 只拱手,不握手 (“only cup hands, do not shake hands”, Fig. 2) and it is shown why: viral particles, germs, the dangerous droplets may accumulate in the hands, much better to shake one’s own, not someone else’s hands, then, “guarding etiquette and protecting health” 守護禮儀更手護健康 (Fig. 3). And this “new” gesture is there to stay, in spite of the occasional “habitual” relapse: the memorable greeting scene—end of September 2020—between Taipei’s mayor Ko Wen-je 柯文哲 (Ke Wenzhe) and Taiwan’s President Tsai Ying-wen 蔡英文 (Cai Yingwen) where she rebuffs his handshake—quite obviously a gesture that for him is equally reflexive and naturalized as for Angela Merkel—is a strong sign, as she responds with the gongshou (Fig. 4): shifting asymmetries in cultural flows? 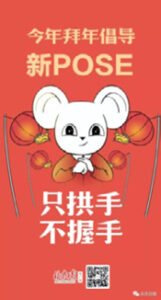 Fig. 2: Beijing Daily advertisement warning of the handshake and introducing an alternative style of greeting: 只拱手不握手 “Only cup hands, do not shake hands”. [12]

The global call for social distancing has significantly changed rules and gestures of conduct and etiquette that had travelled the world for centuries. The handshake is one such example. Today, China’s equivalent of Wikipedia—the online encyclopedia Baidu baike 百度百科 (perhaps roughly translated to A Hundred Systems, A Hundred Categories)—tells us that the “handshaking ritual” wo shou li 握手礼, as it is called in Chinese, “is the most popular courtesy practiced in the world today 握手为礼，是当今世界最为流行的礼节.”[3] Yet less than a century ago, there was much doubt and criticism about this “handshake ritual” in China. While the country showed herself inspired by many a foreign custom and practice—cultural flows were surely going East since the 19th century—the handshake was controversial from the beginning. As part of a virulent discussion about hygiene which had begun in China with the advent of foreign medicine, some would even consider the gesture as one of the most irresponsible acts that foreigners engaged in.[4] 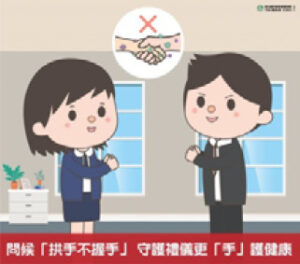 Fig. 3: Public Advertisement from Taiwan: “In greeting cup (your) hands instead of shaking hands, guarding etiquette and protecting health.” 拱手不握手-守護禮儀更手護健康. [13]

One adamant critic of the practice, the writer and philosopher Lin Yutang 林語堂 (1896-1976), son of a Christian minister who, in his own words “first came to life” at Widener Library at Harvard, describes, in Chapter VIII of his cheeky collection of essays The Importance of Living, entitled “Some Curious Western Customs” and first published in New York in 1937[5] that “One great difference between oriental and occidental civilizations is that the Westerners shake each other‘s hands, while we shake our own. 東西文化不同之點甚多，而握手居其一。西人見面互相握手，華人見面握自己手.”

And he continues: “Of all the ridiculous Western customs, I think that of shaking hands is one of the worst. I may be very progressive and able to appreciate Western art, literature, American silk stockings, Parisian perfumes and even British battleships, but I cannot see how the progressive Europeans could allow this barbarous custom of shaking hands to persist to the present day. I know there are private groups of individuals in the West who protest against this custom … But these people don’t seem to be making any headway, being apparently taken for men who make mountains of molehills and waste their energy on trivialities. I am one of these men who are always interested in trivialities. As a Chinese, I am bound to feel more strongly against this Western custom than the Europeans, and prefer always to shake my own hands when meeting or parting from people, according to the time-honored etiquette of the Celestial Empire …”[6] 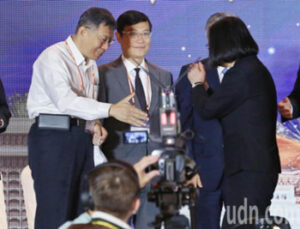 One of Lin’s most important points, is hygiene: “Now consider the hygienic objections. The foreigners in Shanghai, who describe our copper coins as regular reservoirs of bacteria and will not touch them, apparently think nothing of shaking hands with any Tom, Dick or Harry in the street. This is really highly illogical, for how are you to know that Tom, Dick or Harry has not touched those coppers which you shun like poison? What is worse is, sometimes you may see a consumptive-looking man who hygienically covers his mouth with his hands while coughing and in the next moment stretches his hand to give you a friendly shake. In this respect, our celestial customs are really more scientific, for in China, each of us shakes his own hand. I don’t know what was the origin of this Chinese custom, but its advantage from a medical or hygienic point of view cannot be denied.” 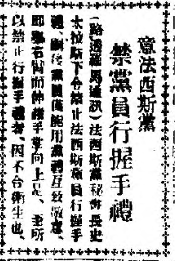 Fig. 5: SB 7.5.1933 意法西斯黨禁黨員行握手禮, Article on the Italian Fascist Party who stop handshaking out of a concern for hygiene.

His arguments put forth in the late 1930s had been rehearsed in China’s news media for decades. The Shenbao 申報, one of the most important newspapers in China, published in Shanghai [from 1872 to 1949], would regularly warn of the dangers of handshaking. Chinese scholar, physician, and translator Ding Fubao 丁福保 (1874-1952), for example, an important broker between western-trained physicians and reform-minded practitioners of Chinese medicine, wrote a long and engaged article in the Shenbao in 1913 in which he detailed how important hand hygiene is, and how dangerous, consequentially, every single handshake could be—as hundreds of thousands of infectious particles may be passed on.[7]

Throughout the years, articles that cast doubt upon the sanity of engaging in the “handshaking ritual” can be found regularly, often taking the form of curious scenes from foreign countries. In April 1929, President Hoover is reported to have limited the number of people he would greet by handshake to ten per day because he had, in fact, on a previous day had to greet more than 1750 people and his hand and wrist had badly swollen.[8] In May 1933 (Fig. 5),[9] the Shenbao reprints a Reuters report relating that the Fascist Party of Italy had forbidden handshaking, concerned with the fact that it could be unhygienic (因不合衛生也). The report explains that the Party “had ordered its members no longer to shake hands, but instead, to salute each other with a party salute (the right arm extended with the palm up).” In spite of such criticism and ridicule, the “handshaking ritual” established itself as the naturalized form of greeting in China and Taiwan. This is so much so that in the days of Corona, trying to explain alternative ways of greeting—such as the gongshou 拱手—takes some effort. In “Six vintage ways to say hello 六種復古的見面問候方式“, the (anti-Chinese Communist Party, CCP) overseas Chinese newspaper Epoch Times 大紀元 therefore dedicates an entire article, including illustrations, to explaining how to use these long forgotten traditional greetings—the hand cup prominently among them.[10] 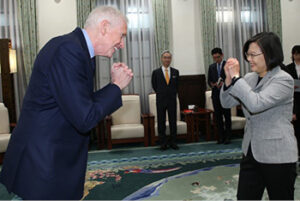 As the memorable scene between Taipei’s mayor Ko Wen-je 柯文哲 (Ke Wenzhe) and Taiwan’s President Tsai Ying-wen 蔡英文 (Cai Yingwen) brought us back, full circle to Angela Merkel and Horst Seehofer—and the end of the handshake—a new chance for alternative and, perhaps, more sanitary, forms of greeting appears to be in the offing. Another report from Taiwan dating back to March, points a new direction: “Meeting foreign guests under epidemic conditions, Tsai Ing-wen does not shake hands but instead, cups her own hands in greeting 在疫情下接見外賓 蔡英文拱手而不握手”. The accompanying photograph shows her American guest, who returns her greeting—with the same gong shou gesture (Fig. 6): as we engage in social distancing, we are living a moment of shifting asymmetries in cultural flows!

[1] “The End of the Handshake: Saying Hello during the Coronavirus outbreak”, The Guardian, 3.3.2020

[5] Lin Yutang, The Importance of Living, New York, John Day: Reynal & Hitchcock, 1937. The advertising text on the book hints to some of the reasons for its success:

“A wry, witty antidote to the dizzying pace of the modern world. Lin Yutang‘s prescription is the classic Chinese philosophy of life: revere inaction as much as action, invoke humor to maintain a healthy attitude, and never forget that there will always be plenty of fools around who are willing—indeed, eager—to be busy, to make themselves useful, and to exercise power while you bask in the simple joy of existence. At a time when we›re overwhelmed with wake-up calls, here is a refreshing, playful reminder to savor life’s simple pleasures.”

[11] Image source: Anadolu Agency/Anadolu Agency via Getty Images in “The End of the Handshake: Saying Hello during the Coronavirus outbreak”, The Guardian, 3.3.2020.